The film is in production at the Tokyo Olympics, where Al-Kateab and producer Joanna Natasegara are following the team consisting of 29 athletes originating from 11 countries, and residing in 13 host nations.

Director Al-Kateab made her Oscar-nominated directorial debut with “For Sama,” which followed her own experience as a journalist who elected to stay with her husband and young daughter in the embattled city of Aleppo during the Syrian Civil War. After “For Sama” won four BAFTA awards, making it the most nominated documentary in BAFTA’s history, Al-Kateab started the “Action For Sama,” advocacy campaign which raises awareness on Syrian conflicts. 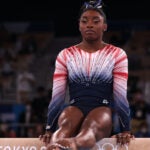 “I am so honored to have the opportunity to capture the stories of these inspirational athletes on their way to competing at the biggest sports event in the world,” Al-Kateab said in a statement. “So much of their experience I recognize in my own journey as a refugee and I feel very committed to representing their heart, determination and resilience in a way that they deserve. Despite the hardship for anyone leaving their homeland behind, the Refugee Olympic Team stories are a moving combination of ambition, joy and challenges.”

“It’s a thrill to be working with this team on this film,” Natasegara said. “The Refugee Olympic Team is a rich and diverse group showing off the best of humanity’s traits. Their journeys to date have been challenging both in life as well as on the road to Tokyo and we feel privileged to have had the opportunity to live through this period with them. Through Waad’s unique vision and leadership and our truly unique access, we endeavor to create a very special portrait of these world-class athletes at an amazing point in their lives.”

“Global refugee relief and protection is a crucial issue and one that is very important to me,” Gebbia said. “Being able to tell this revolutionary story to show the struggles of these triumphant and incredible athletes conquering one of the greatest human feats, is an honor. Their experiences deserve to be shared with the world at large.”

“Our hope for this documentary is to shed light on the global refugee crisis through the lens of these talented athletes who have continued to show immense bravery and strength no matter their circumstances,” XTR CEO Bryn Mooser said. “We are honored to support Waad to tell the stories of these amazing athletes and her perspective on their survival and perseverance is deeply personal and profound.”