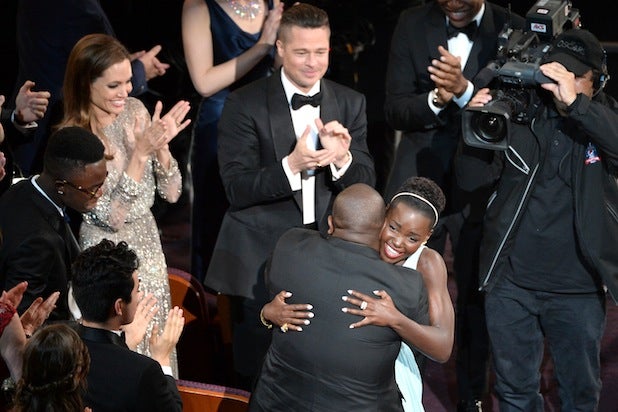 It wasn’t the kind of uplifting, commercial movie the Academy has been going for in recent years.

Anecdotal evidence said it was too brutal and harrowing for some squeamish voters to even watch.

Its chief rival had made five times as much money, had a better Rotten Tomatoes rating and went into the final award of the night having won five more Academy Awards.

But Steve McQueen‘s “12 Years a Slave” came out on top on Sunday night at the Dolby Theatre, winning the Best Picture award at the end of the tightest and most competitive Oscar race in more than a decade. More than 160 years after Solomon Northup published a book about the dozen years he spent unlawfully held as a slave in the deep South, the movie version of that book became the toast of an Academy that some thought would be too timid to embrace it.

Strangely, given the closeness of the Best Picture race between “Slave” and Alfonso Cuaron‘s “Gravity,” the night went almost entirely according to expectations. All four acting awards went to the clear frontrunners: Matthew McConaughey and Jared Leto for “Dallas Buyers Club,” Cate Blanchett for “Blue Jasmine” and Lupita Nyong’o for “12 Years a Slave.”

But the final award of the night remained a nail-biter right up until the envelope was opened, because both “Gravity” and “12 Years a Slave” had done what they needed to do. The former film swept through the first half of the show, racking up wins for visual effects, sound mixing and editing, film editing, cinematography and score, before Cuaron won the Best Director prize that he was almost universally expected to win.

“12 Years a Slave,” meanwhile, lost a few of the early races. But it won two key prizes, Nyongo’s Best Suppporting Actress award and John Ridley’s Adapted Screenplay honor, setting it up for the same kind of rally it staged at the Golden Globes and at BAFTA.

At the first of those shows, in January, “Slave” lost in the first seven categories in which it was nominated before winning the final (and biggest) award of the night, Best Motion Picture – Drama.

At BAFTA a month later, it was similarly shut out until the very end of the show, when star Chiwetel Ejiofor suddenly won the best-actor prize and the film itself was named best picture.

And the pattern was repeated at the Oscars: “Gravity” won the most awards, seven, but the three that “12 Years a Slave” won included the one that counted most.

The other film that seemed to be a potential Best Picture winner, David O. Russell’s “American Hustle,” didn’t fare so well. It was only favored in one category, Best Original Screenplay, but it lost there to Spike Jonze’s “Her,” meaning that the film that had gone into Oscar night tied with “Gravity” for the most nominations, 10, didn’t win a single award.

(It fell just short of being the biggest 0-fer in Oscar history, with the 0-for-11 showings of “The Color Purple” and “The Turning Point” still holding the record.)

“12 Years a Slave,” on the other hand, won an emotional and even historic victory that some thought it had in the bag as far back as September, though it never seemed to be a secure frontrunner.

The film won raves out of the Telluride and Toronto Film Festivals in early September, to the point where some pundits declared the Oscar Best Picture race over.

And when critics’ groups around the country began voting at the end of the year, it won far more best-film awards than any of its competitors and seemed to be in prime position to become Fox Searchlight’s second Best Picture winner, after 2008’s “Slumdog Millionaire.”

But Searchlight waged an understated campaign for the film, which seemingly lost momentum when late entries “American Hustle” and “The Wolf of Wall Street” burst into the race with energy and abandon in December.

Also read: Oscars Backstage: Lupita Nyong’o Says ‘You Have to Allow for the Impossible to Be Possible’

When Oscar nominations came out just after the Globes and “Slave” finished third in total noms behind “Gravity” and “Hustle,” its position as the unassailable frontrunner seemed shaky. And at the Producers Guild Awards, the most reliable of the guild honors and the only one that also uses the Academy’s preferential system of counting votes, it finished in an unprecedented tie with “Gravity” rather than winning outright.

In its favor, director McQueen was a constant presence on the circuit, which must have been a chore for a man who has never been known to suffer fools. And costar Nyong’o was one of the stars of awards season, turning heads on one red carpet after another.

Still, stories spread that many Academy members were putting off seeing the film because of what they’d heard about its brutality. In a race as tight as this one, every vote counts, and none of the top contenders could afford the slightest disadvantage.

So when Searchlight launched a homestretch ad campaign based around the tagline “It’s time,” the company’s appeal was seen by some as having a simpler message: not “it’s time for a movie directed by a black  man to win Best Picture,” but “it’s time for you timid voters to pick up that screener and watch the movie.”

However it was intended, the campaign ran the risk of telling voters what they should do, always a risky strategy with Academy members. But by making a nod to history, Searchlight also tapped into a key thing about Oscar voters: They do like to think about the big picture, to pick winners that will make them look good.

As a result, even voters that didn’t put “Slave” in the top spot on their ballots may have ranked it in the top two or three or four, a crucial element in becoming the kind of consensus favorite needed to win under the preferential system.

And when the voters took the measure of a rich year for cinema and decided that the movie that would best exemplify that year in Academy annals was the tough, unflinching and unsparing one, they made a choice that will likely resonate for years.

The ads gave them the slogan, and the Academy turned it into a statement: It’s time.