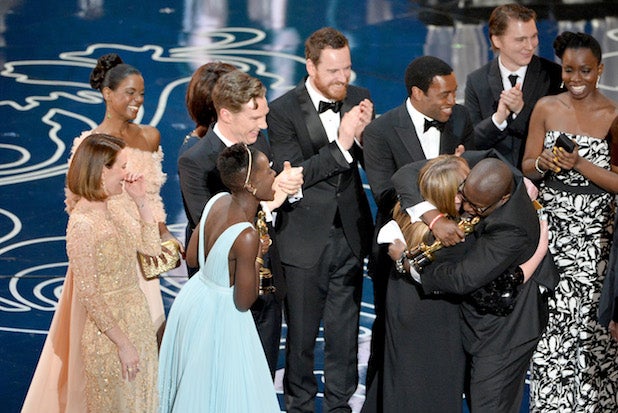 “12 Years a Slave” battled through one of the tightest races in Oscar history to win Best Picture on Sunday night at the 86th annual Academy Awards, capping an extraordinary year for black filmmakers and movies in general.

“American Hustle” was shut out and “Gravity” rolled through the technical categories with seven wins — as well as director and editor honors for Alfonso Cuaron — leading many to believe that the space adventure was on its way to ultimate victory.

But Will Smith took the stage, opened the envelope and called out “12 Years,” causing a whoop to go up at the Dolby Theater. Director Steve McQueen, normally mercurial and moody, was jubilant, first thanking producer/actor Brad Pitt — “without him the movie simply would not have been made” — and concluding with a word on the film’s subjects.

“I dedicate this award to all the people in the world who have endured slavery … and to the 21 million people around the world” still in bondage, McQueen said.

Blanchett was perhaps the biggest slam-dunk — she’s been rolling toward this win ever since critics first saw her “Blue Jasmine” performance, and took her time with thank-yous, not forgetting to include the embattled screenwriter Woody Allen (who was not in attendance).

“Thank you so much for casting me,” she said, garnering only a polite smattering of applause from the Hollywood audience that has endured the re-emergence of Allen’s family scandal in the past weeks.

McConaughey, nearly as much of a lock for “Dallas Buyers Club,” gave an impassioned speech about his family, including his late father, then left with his trademark phrase: “Alright alright alright.”

Up to that point, “Gravity” had been rolling; Cuaron’s technical masterpiece, nominated for 10 Oscars, had picked up seven statues, the most of any film.

“Like any other human endeavour, making a film can be a transformative experience. … which is good because it took so long that it would (otherwise) just be a waste of time,” said Cuaron, who needed several years to make the film that was originally supposed to star Angelina Jolie — who presented his award, perhaps not coincidentally.

Lupita Nyong’o (“12 Years a Slave”) and Jared Leto (“Dallas Buyers Club”) were also big winners — both on stage and the red carpet — as each took home supporting acting trophies after making a different kind of splash on their way into the Dolby Theater.

Leto won the first Oscar of 2014, winning for his role as pre-op transsexual Rayon in “Dallas Buyers Club,” an expected win in a season that saw a lot of the Thirty Seconds From Mars frontman giving speeches at awards-season podiums. As he’s been doing all season, Leto made sure to thank his mom, who was seated in the audience.

“Thank you mom … thank you for teaching me to dream,” he said, also thanking his Thirty Second to Mars bandmate, seated next to her.

Nyong’o was also a favorite for her turn as Patsy in “12 Years a Slave,” but her win was by no means a lock — many thought Jennifer Lawrence (“American Hustle”) could challenge. On Sunday night, this year’s queen of red-carpet fashion also took home gold.

“It doesn’t escape me for one moment that so much joy in my life is because of so much pain in someone else’s,” she said, referencing the slave girl who shed played in McQueen’s epic.

A little later on, Disney Animation’s “Frozen” — another prohibitive favorite — won for best Animated Feature. Chris Buck took the stage with his fellow co-directors, dedicating the win to “our guardian angel,” his son Ryder Buck — a young, up-and-coming Los Angeles musician who was killed in a horrific freeway accident in October.

“Frozen” won another big honor later in the show when “Let It Go” took Best Song honors, moments after Idina Menzel belted a bone-chilling rendition — despite being puzzlingly introduced as “Adele Dazim” by John Travolta. (No one could quite figure out who Adele Dazim is, but a Twitter account in the fictitious singer’s name was thrown up just minutes later.)

Speaking of Twitter — Degeneres broke it: Her mid-show selfie with a cluster of nominees not only became the most-retweeted tweet of all time in less than an hour, it temporarily froze her account.

DeGeneres kicked off the 86th Academy Awards telecast in a black velour tux and a smile, standing among crowd of crystalline Oscar statuettes Sunday on the Dolby Theater stage. What she didn’t do: A song-and-dance routine, a video cold-open or anything else gimmicky.

“It’s been a tough couple of days for us here … it’s been raining. Thanks for your prayers,” she joked, then went on to deliver a standard monologue, zinging nominees and playfully visiting the audience from time to time, including making a pizza delivery order that a few hungry attendees clearly appreciated.

The toned-down tone was a continuation of the gray and soggy exterior: It was a little drizzly out there, but the Academy Awards red carpet went off without a hitch (unless you consider  Lawrence’s latest “trip,” apparently over a cone as she exited her limo, to be a hitch).

“20 Feet From Stardom” took Best Documentary Feature, and one of its stars, Darlene Love, grabbed one of the show’s most memorable moments. During the acceptance speech, Love broke into song, belting out a few bars that brought the Dolby Theater to its feet.

Stars began to arrive on the red carpet about two hours before the telecast began, and none with more fanfare than Nyong’o (“12 Years a Slave”), whose rotation of red-carpet looks stole awards show after awards show this season. On Sunday she stepped out in a frost blue Prada dress with plunging neckline, long train and an elegant headband, capping a season that’s made her as much a fashion force as an acting one.

Leto, her Best Supporting Actor-winning counterpart, also stood out on the red carpet, in a white tuxedo with red bowtie (photo below, right) and those famous locks flowing in the breeze — no “man bun” for the Thirty Seconds to Mars singer this time.

One person who wasn’t there: Dame Judi Dench, best-actress nominee for “Philomena,” was in India where she’s filming “Best Exotic Marigold Hotel” and didn’t feel up to making the trip.

Before the show, hundreds of visual effects workers gathered outside at the corner of Hollywood and Vine to protest the industry’s increasing reliance on foreign and state film production subsidies. They wore green T-shirts, held green umbrellas — to symbolize the green screen they use when creating the bulk of Hollywood’s visual wizardry.

The “heroes”-themed Oscars ceremony aired on ABC, and is streaming on ABC’s app and online for the first time this year.