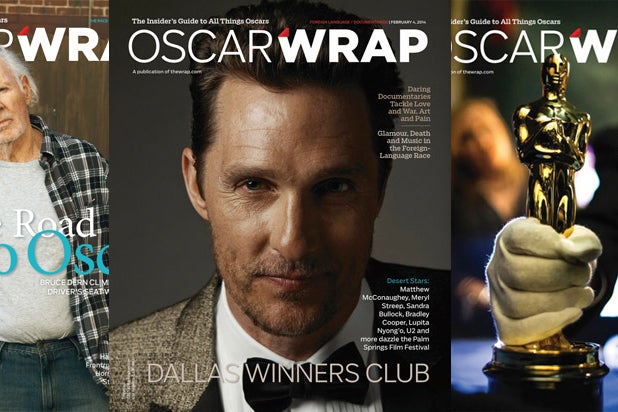 OscarWrap: Down to the Wire

Why Disney Fired John Lasseter – And How He Came Back to Heal the Studio
The Pixar co-founder, given the boot by Disney almost 30 years ago, returned to put the studio on the verge of its first animated-feature Oscar.

Steve Pond Explains It All: How the Oscars Voting Process Actually Works (Video)
The Academy’s preferential system can be hard to explain in print, so TheWrap’s Awards Editor will demonstrate — with poker chips.

Oscar Stage Manager Reveals Backstage Secrets From 25 Years in the Wings
Newly retired stage manager Dency Nelson saw everything that happened on and offstage during his 25 years at the Oscars, and talks with TheWrap about what he will miss most

86 Facts You May Not Know From OscarWrap’s Behind-the-Scenes Guide
From rehearsal to backstage — all you need to know about the show, the statuettes, the red carpet and even the restrooms backstage at the Dolby Theatre

OscarWrap: Behind the Scenes With Jennifer Lawrence and Adele (Photos)
A look at Hollywood’s big night from preparations to intimate backstage moments

58 Oscar Stats You May Not Know
Who has hosted the most Oscar ceremonies? How many women have hosted? What Oscar records do Jennifer Lawrence and Woody Allen hold? All those, and dozens of other questions answered

Why Thomas Vinterberg Ditched Dogma for ‘The Hunt': It Was Like Putting on an Old Dress’
The director, a co-founder of the movement with Lars Von Trier, tells TheWrap he wanted to find a new way to tell a story about a modern day witch hunt

‘The Missing Picture': Oscar-Nominee Rithy Panh on Restoring the Dignity of Genocide’s Victims
Foreign Language nominee examines the legacy of the Killing Fields with clay figurines

Oscar Doc Nominees: The Stories They Tell
From war to art, the nominated documentaries go deep and dark

How a Modern-Day Animator Brought Mickey Mouse Back to Life in ‘Get a Horse!’
Lauren MacMullan tells TheWrap that she didn’t feel the full weight of responsibility until after she finished the Oscar nominated short

Inside ‘American Hustle': David O. Russell Takes His All-Star Cast on Wild Ride to the ’70s
The cast talks with TheWrap about the director’s unconventional approach while filming the period tale.

Carey Mulligan on the Coen Brothers: They Pushed Me to Be Nastier and Say More Swear Words
Forget about the sweet Carey Mulligan you think you know — in “Inside Llewyn Davis,” she gets to sing, scream and swear.

Inside the 10-Year Odyssey to Make ‘Nebraska’ With Alexander Payne
Producers Albert Berger and Ron Yerxa talk with TheWrap about budget battles with Paramount and a Cannes debut that initially seemed like a disaster.

‘Her’ Designer: Instead of Trying to Create the Next iPhone, We Went in Another Direction
K.K. Barrett wanted to craft a more old-fashioned looking device for Joaquin Phoenix’s Theodore.

‘Nebraska’ Cinematographer Explains Why Bruce Dern’s Face Is Better in Black & White
Phedon Papamichael with TheWrap about working with Alexander Payne and why Dern makes the perfect muse.

‘Captain Phillips’ Director Paul Greengrass Explains Why the Closing Scene With Tom Hanks Was So Authentic
Greengrass, Tom Hanks and Barkhad Abdi spoke with TheWrap about the challenging shoot.

Why ‘Dallas Buyers Club’ Took 20 Years to Hit the Big Screen
The screenwriters talk with TheWrap about their long fight to get the story about an AIDS-stricken pill impresario produced — despite the interest of stars from Brad Pitt to Woody Harrelson and Ryan Gosling.

Why the Coen Brothers Wanted to Folk It Up on ‘Inside Llewyn Davis’
Ethan and Joel Coen talk with TheWrap about their struggle to find the right guy to play a Greenwich Village singer circa 1961.

Jason Reitman on Directing ‘Labor Day': ‘It Felt Like Making My First Movie All Over Again’
The director talks with TheWrap about learning how to make a film without snappy dialogue.

‘Omar’ Director: Politics Has Failed, but Cinema Can Open Minds
Director Hany Abu-Assad landed his second Oscar foreign-language nomination after panicking and thinking, Why am I making bad movies?

5 Ways to Write an Awards Contender
There’s no blueprint for how to get it right — just ask the men behind “Rush,” “Nebraska,” “12 Years a Slave,” “All Is Lost,” and “The Secret Life of Walter Mitty.”

How Animators Brought 5 Oscar Contenders to Life
The filmmakers behind “Frozen,” “The Croods” and other frontrunners reveal how they turned rough sketches into three-dimensional beauty.

How ‘Ernest & Celestine’ Director Benjamin Renner Created His Own Storybook Ending
The co-director originally signed on to draw storyboards for the adaptation.

‘The Wind Rises’ Director Hayao Miyazaki Goes Out in a Blaze of Controversy – and Beauty
The Oscar winner has struck a nerve with his last film.

Alex Gibney on Lance Armstrong Lying to Him: I Had to Investigate Myself (Video)
“I began to look for signs, for the tells, like when he is telling me something close to the truth and when he is lying”

16 Breakthrough and Comeback Performances of This Awards Season
It has been a year noteworthy for arresting performances from actors who’ve never had showcases like this before, and vets who’ve been away from the limelight.

Why Jared Leto Dropped His Guitar and Put on a Skirt for ‘Dallas Buyers Club’
As a transgendered drug addict, Leto makes an eye-catching return to acting after spending nearly six years focusing on music.

How Oscar Isaac’s Career Fallback Landed Him ‘Inside Llewyn Davis’
The actor’s side job as a musician came in handy when the Coens were trying to cast the uncastable title role.

How Cate Blanchett Got Ready to Play a Boozer in Woody Allen’s ‘Blue Jasmine’
“I drank my share of rose,” actress admits during an interview with TheWrap.

Why Steve Coogan Told ‘Philomena’ Director Stephen Frears to Keep an Eye on Him
The actor spoke with TheWrap about his drive to write a dramatic film that was also funny.

Kate Winslet on the Advantages of Being Hot and Sticky in ‘Labor Day': ‘It Was Like a Pressure Cooker’
The Oscar-winning actress embraced a character who makes inexplicable decisions in Jason Reitman’s unconventional romance.

Oscar Voters, Don’t Forget About These 2013 Standouts (Photos)
Don’t be blinded by this year’s frontrunners — TheWrap recommends other films and performances deserving attention this year

Behind the Scenes: OscarWrap 2013 Cover Shoot With ‘Nebraska’ Star Bruce Dern (Video)
The “Nebraska” star tells how he cheered up a sobbing Marilyn Monroe

‘Inequality for All’ Star Robert Reich: U.S. Economic Divide Is Getting Worse and Worse
The former labor secretary talks with TheWrap about the growing threat of wealth disparity

‘Act of Killing’ Director on Filming His Shocking Documentary: It Gave Me Nightmares
Joshua Oppenheimer talks with TheWrap about death threats and government-sanctioned killings in Indonesia nearly 50 years ago