Numerous investors, partners and employees have distanced themselves from Carlos Watson’s embattled Ozy Media in the days since the New York Times published an exposé of the digital media company on Sunday.

Silicon Valley venture capitalist Ron Conway surrendered all his shares in the 8-year-old digital media company, Axios reported on Wednesday, citing multiple sources. Conway was one of the first investors in Ozy, which bills itself as a “modern media company.”

Former BBC anchor Katty Kay also announced Wednesday that that she had resigned from her 4-month-old job as an executive producer and senior editor at Ozy, citing the Times’ “serious and deeply troubling” report.

In addition, a spokesperson for A&E confirmed that the network has pulled the second installment of Ozy’s two-part “Voices Magnified” special that had been slated to run on Monday, one day after the Times revealed that COO and co-founder Samir Rao impersonated a Google executive on a call with Goldman Sachs executives and reported that Ozy leadership appeared to be inflating video views and online traffic statistics. 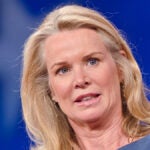 The A&E representative noted that there are no further projects with Ozy in the pipeline and added that the network works with hundreds of partners to create shows. Ozy, the rep said, was just one of many — and there’s no impending decision on the fate of the joint Ozy/A&E podcast since it’s not currently in production.

In the midst of the mounting firestorm, Ozy Media itself has gone radio silent. Though CEO Carlos Watson defended himself and the company Monday in an interview with TheWrap, he and his representatives have stopped responding to press requests. (Watson did pull out as host of Wednesday’s News and Documentary Emmys ceremony.)

On Tuesday, Ozy’s board of directors — led by venture capitalist Marc Lasry — announced that it had placed Rao on a leave of absence pending an independent investigation into his conduct. “We will continue to review the company’s leadership in the coming months,” the board said in an unsigned statement.

Lasry, who was named chairman of Ozy’s board earlier this month, was the lead investor in a Series C funding round in 2019 worth $35 million, according to Crunchbase.

Other investing partners, like Axel Springer, which invested an undisclosed amount in Ozy in 2014, have also remained silent. A representative for the publishing giant told TheWrap: “We have nothing to add.”

The embattled company has come under increased scrutiny for its operations, including its signature Ozy Fest live events. According to a Wednesday report in Forbes, the company consistently struggled to secure talent and sell tickets to its events — particularly a 2019 Ozy Fest to be located in Central Park’s vast Great Lawn that claimed to draw an audience as big as 100,000 people, which Forbes reported was nearly impossible to achieve. That event was ultimately canceled due to a heat wave. Ozy and Watson did not respond to requests for comment on the Forbes story or other inquiries.