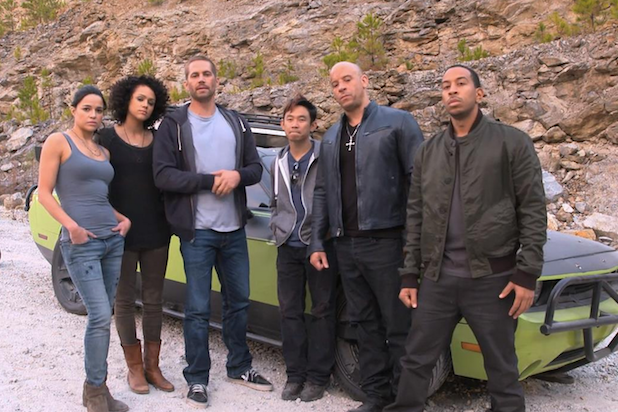 It was a chilly Sunday on the Atlanta set of “The Fast and the Furious 7,” and though the cast wouldn’t scatter for a weeklong Thanksgiving break for another 48 hours, Paul Walker‘s mind was already on his charity event.

During a down moment, Walker assembled a few castmates for a quick photo. With a message in support of disaster relief organization Reach Out Worldwide, the pic (above) would become the last he’d ever send from a movie set to his 9.2 million-fan Facebook page.

Tuesday came and the cast decamped, including Dwayne “The Rock” Johnson, who tweeted a playful farewell-to-Atlanta photo (left) from the plane; in the coming days, other castmates would post dozens of photos of friends, food and family.

For Walker, that also meant his racing family.

Unlike his “Fast 7 ” co-stars, Walker wasn’t jetting off to get away from supercars doing obscenely dangerous things. He was flying to them.

Walker was a true speed demon — a gear-head, a rubber-ripping racecar-driving adrenaline junkie — long before “The Fast and the Furious” or any of its mega-sequels gave him enough money to afford the world’s most expensive fix.

“I’ve always been into cars,” Walker recently told Entertainment Tonight in a conversation light on movies but heavy on his family’s hot-rodding streak. “Growing up with all the car publications around the house, going to my grandfather’s shop … he was the first to break 160 mph with the Ford Falcon back in the day, which was a big deal.”

In fact, Walker’s jonesing for adrenaline was the reason he was in the “Fast” movies to begin with.

Though he’d enjoyed a modest Hollywood run in movies and TV, his career got a turbo boost in 2000, when Universal had the bright idea of putting a bona-fide car guy in its 2001 car movie “The Fast and the Furious.”

“Universal came to me with a newspaper article about street racing in L.A. and I was like ‘Are you kidding me? I grew up doing that right off Peoria in Sun Valley,'” he told Motor Trend in an interview earlier this year. “They asked if I wanted to do it. There wasn’t even a screenplay, there was nothing, but I was like …’Fuck yeah, I want to do it!'”

Walker was in good spirits when he arrived Saturday morning at the Santa Clarita warehouse of Always Evolving, the exotic sports-car business in which he had a significant stake. The shop was bustling with a toy drive that also benefited Reach Out Worldwide, Walker’s network of disaster relief first-responders, which he’d created four years ago and was now freshly grappling with the aftermath of the Philippines typhoon.

Attendees said Walker seemed overwhelmed at the response — the Reach Out Worldwide Facebook page reported more than 300 people attending — and spent his time chatting with fans and employees. Just before 2 p.m., Reach Out sent a tweet declaring the event a win:

Our Winter Drive event with Always Evolving, AutoCon, & #Purist was a huge success! Thank you to everyone who… http://t.co/WwW04pybBq

Then, about an hour later, a small sign of trouble: one of the shop’s most prized specimens started acting up.

That got Walker’s attention.

“I’m a speed demon,” Walker told the interviewer back in May.

She asked how fast he’s gone in a car before.

“Just under 200. I did 197. I just haven’t broken 200 yet, which is driving me crazy! I’ll do it; it’s just a matter of finding the right car. Every car I have has plenty of power for that and everything — it’s just aerodynamics.”

Asked whether his favorite car was something vintage, Walker swerved clear of the loaded question.

Always Evolving had been posting photos of its cars on its Facebook page all day – Ferraris, a Ford GTO, a racing Mustang, a Maserati – but perhaps none more eye-popping than the racing-red Porsche Carrera GT, an out-of-production two-seat supercar that the business acquired just this spring for more than $350,000.

“Our babies!” read one caption, and smack in the middle was the Carerra (right), a distant cousin to the Porsche 550 Spyder that James Dean crashed some 58 years ago in Salinas.

Hailed as “the greatest Porsche ever built,” the Carerra features a 612-horsepower V-10, a howling beast caged in a lightweight carbon-fiber shell; together they are capable of hitting 60 mph in under 4 seconds with a top speed of 205 mph.

With that kind of power comes a mighty thirst for gas.

Somewhere beneath the Porsche’s mid-mounted engine, which sits back-to-back with driver and passenger, is a tank that holds 24.3 gallons of premium fuel – likely the shop’s own high-octane blend, in this case – enough to keep a large sedan going for a good long time, or a gas-chugging German supercar screaming and squealing for a short one.

Roger Rodas probably knew more about driving Porsches than anyone within a tank of gas — as a pro racer, he’d made his mark during many years in the Porsche Cup Cars series.

The 38-year-old had since given up the German supercar circuit, but as CEO of Always Evolving and captain of its racing team he was still competing, and had just driven his 2013 Ford Racing Boss 302 Mustang to a 13th-place points finish in the 10-event Pirelli World Challenge GTS. The year before, he’d finished second.

Rodas (left) and Walker had met at a racetrack years before; Rodas started out as Walker’s financial advisor and driving mentor, a relationship that evolved into a close friendship and financial partnership.

And anytime you put a couple of experienced hot-rodder buddies who haven’t seen each other for awhile into a supercar on a sunny Saturday afternoon in Southern California, there will be speed.

“Everybody was winding down,” attendee Jim Torp, who spoke with several media outlets that day, told E! News. “They were getting ready to park a Porsche and decided to take for joyride.”

Indeed, as the cars were being put away, an Always Evolving employee was struggling to the get the thoroughbred Porsche backed into its stable – that much torque requires an expert foot, especially when in finicky reverse – so Rodas jumped in to park the car himself, TMZ reported Sunday night. He soon came upon Walker, who remarked that he’d never ridden in his business partner’s new GT.

Then Walker (pictured right) hopped into the passenger’s side. Rodas took the Carerra out of reverse.

At 3:10 p.m., the Porsche pulled out of the parking lot. For the next 20 minutes, with people still lingering as employees continued packing up the event, nothing seemed out of the ordinary.

At approximately 3:30 p.m., some witnesses recalled hearing what sounded like an explosion in the distance. Other attendees said phones began to ring around the event – news was spreading that there had been a wreck. A plume of black smoke, about a quarter-mile away as the crow flies, showed them precisely where.

Fearing the worst, friends, family members and employees of Always Evolving jumped into their own cars, many armed with fire extinguishers.

What they came upon was a horror. The Porsche, on its return trip from their joyride, was wrapped around a pole on hilly Hercules Street, “a normally quiet road with a 45-mph speed limit” near a business park, the LA Times reported. Nearby signs warn drivers to slow down as they approach an uphill curve of the four-laner — the kind of challenging sequence Rodas had deftly maneuvered thousands of times before.

Though Rodas’ body was obscured, many witnesses reported that they could see Walker still strapped into his bucket seat, unconscious and burning.

“I want to have my cake and eat it, too,” Walker told the interviewer. “Live this life, that life … who says you can’t have it all? You only live one time; I want to get it all in.”

Though he never married, Walker had a 15-year-old daughter, Meadow, who in 2011 had moved from Hawaii to California to be closer to her father. He had a producing deal at Universal and countless years of “Fast” paychecks to look forward to. He held a brown belt in Brazilian Jiu-Jitsu, fed his passion for marine biology by volunteering for a shark-tagging expedition and traveled the world with Reach Out to lend a hand following earthquake disasters in Chile and Haiti.

But above all, Walker was a speed freak. It was his cars he loved most.

In those first moments of panic, so many people tried to help.

Among the first to arrive was a childhood friend of Paul’s named Newt, who emptied his fire extinguisher on the blaze and at one point tried to reach in to release Walker’s seat belt, TMZ reported Sunday night (a man can be seen at the side of the car in the screenshot, left, of a bystander video obtained by TMZ). So overwrought was Newt that when firefighters finally arrived, the man punched one as they tried to pull him away.

Antonio Holmes, who identified himself as Walker’s friend, told a TMZ cameraman that at least seven fire-extinguishers were emptied before firefighters arrived. Multiple people were detained because they refused to stop helping; all were eventually released.

One of those who firefighters had to pull away from the burning wreckage was Rodas’ young son, Torp told the LA Times. He also said Walker’s daughter Meadow was there.

“They kept his daughter off to the side, so she wouldn’t know what was going on until they really know what had happened,” he told E! news, adding that the 15-year-old “was in pieces.”

Though TMZ was first to break the news of Walker’s death, Always Evolving was first to confirm it, with a Facebook post sent at 7:14 p.m., followed by an outpouring of shock and grief in Hollywood. Some “Fast” castmembers posted notes of grief — Dwayne Johnson, Ludacris and director James Wan among them – while others, like series star Vin Diesel, were too shaken to immediately respond.

Production was supposed to get rolling again Monday in Atlanta, but was scrapped after a flurry of phone calls between executives, producers and Wan. The LA County Coroner’s office still hasn’t identified the victims – the bodies were so badly burned that dental records have been sent for – and the investigation is ongoing.

Looping, figure-8 shaped tire tracks near the crash suggested Rodas may have been doing donuts there, something superpowered rear-wheel-drive cars (and race-car drivers experienced at celebrating victory) are especially good at, though those tracks have not yet been directly connected to the wreck, investigators cautioned.

But there was one thing that accident investigators – and anyone who knew anything about Paul Walker and Roger Rodas – could immediately agree upon:

Speed may have been a factor.