Ti West’s “X,” released this past March, was one of the year’s biggest surprises. Released by art house darlings A24, it used the rough framework of past horror classics like “The Texas Chain Saw Massacre,” as a prism to explore the impact of cinema amid the emergence of the pornography industry, particularly as it relates to age. As the movie was being released theatrically, West let slip that he had actually shot a secret prequel film in the weeks following “X’s” production in New Zealand and, what’s more, this new film, called “Pearl,” would be coming out very soon. And, thanks to a blood-splattered new trailer, we know that it will be here very soon indeed — Sept. 16.

The official synopsis for “Pearl” reads: “Trapped on her family’s isolated farm during the 1918 pandemic, Pearl must tend to her ailing father under the bitter and overbearing watch of her devout mother. Lusting for a glamorous life like she’s seen in the movies. Pearl’s ambitions, temptations, and repressions all collide, in the stunning, technicolor-inspired origin story of ‘X’s’ iconic villain.” Mia Goth (who also co-wrote the screenplay), returns to play Pearl.

This trailer features multiple callbacks to the first film, from the opening shot of the fence in front of the farmhouse opening up to the alligator in the lagoon behind the house, to the talk about the introduction of the pornographic film. It is also insanely violent, with people getting stabbed, set on fire and detonated. 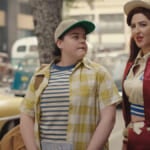 Also Read:
‘A League of Their Own’ Trailer Shows Women Ready to Break the Rules (Video)

“Pearl” seems to be the rare case of an attempted “cinematic universe” that is actually worth exploring. (West is currently working on the script for a film that would follow the events of “X.”) The more the merrier, er, gorier, we say.

A24 will release “Pearl” theatrically on Sept. 16.