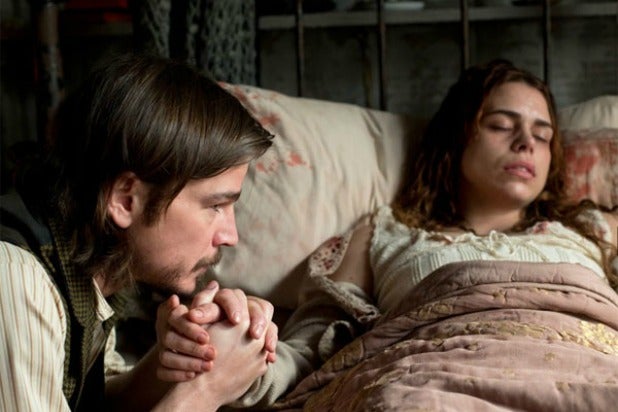 (Spoiler alert: Don’t read this if you don’t want to know what happened on Sunday’s “Penny Dreadful.”)

Sunday’s surprising, satisfying “Penny Dreadful” finale beautifully tied up several of the storylines that creator John Logan has subtly spun throughout the season, while setting up a Season 2 that I badly want to watch. There were there three major surprises by my count, though some fans saw two of them coming long ago.

The first and most surprising: Sir Malcolm (Timothy Dalton) chose the tormented Vanessa (Eva Green) over his own daughter, Mina (Olivia Llewellyn) even after explicitly telling Vanessa he would let her die to get Mina back from her vampiric master. When Malcolm realizes how deeply under the master’s thrall Mina is, he shoots her, declaring Vanessa his true daughter. (Of course, given his affair with Vanessa’s mother, Vanessa may truly be his daughter, though that doesn’t seem to have occurred to either of them.) It was a perfect ending to the Mina arc, both unexpected and moving.

The good news for Sir Malcolm fans is that the death (or second death, as it were) of Mina doesn’t kill his reason for being on the show: He’s also guilt-ridden by the death of his son, the one for whom he failed to name a mountain. His travels abroad have brought back other demons, including, it seems, the apparently Egyptian demon that torments Vanessa.

As for the two other surprises: I didn’t see them coming at all, though others did.

My jaw dropped at the realization that poor Brona Croft (Billie Piper) is to become the bride of Frankenstein — or, more precisely, the god of Frankenstein’s monster, known here as Caliban. The show had one of its best pieces of dialogue when the doctor (Harry Treadaway) promised to take care of her body after speeding along her death by tuberculosis with the help of a pillow. (Victor gets a lot of the good lines, including this one from last week: “Perform the last rites and get the fuck out of this house, you ridiculous man.”)

“Penny Dreadful” is about the strange place between life and death, and I thought poor Brona might be the one exception to the rule. Silly me.

In fact, it seems Ethan Chandler is the exception. Sunday’s episode ended with Vanessa pondering whether she wants to be normal, but perhaps she is normal within the context of “Penny Dreadful.” Maybe Ethan is even more special.

I missed all the hints that Ethan (Josh Hartnett) was a werewolf. But of course he was. His arrival in Victorian London coincided with those dreadful werewolf murders. And remember the accusing looks he received at one of the crime scenes? Clearly during his Wild West adventures he met those sexy Native American werewolves from “Twlilight.” (He also seems to be a former priest, but that’s neither here nor there.)

Ethan has been so sympathetic to this point I found it impossible to imagine he had a monstrous side. And I didn’t catch the werewolf clues at all, thoughtfully planted as they were. Even at the moment he transformed in the bar, my first thought was “Mr. Hyde?” until the show helpfully showed its dumber viewers (why hello there) a full moon.

But it’s striking that Ethan’s monstrous power is the only one that doesn’t inherently involve being trapped between mortal and immortal: the vampires are undead, Vanessa’s possessions help her commune with the other side, Caliban (Rory Kinnear) has been reincarnated, and Dorian Grey (Reeve Carney) decays inside but not out.

Why isn’t Ethan piercing the membrane between dead and alive? Perhaps he doesn’t share the Victorian obsession with morbidity.

While all of the other characters come from Victorian fiction, the werewolf, like Ethan, comes from elsewhere: He’s an American thrown into a very European monster mash. It seems fair that he wouldn’t follow the show’s interior rules. And his feral power reflects exactly how many of the Victorians might have seen Americans: wild, untamed, furry.

Dr. Frankenstein and the vampires don’t so much kill as lure people into a state of neither life nor death. Caliban kills, but also exhorts his creator to find him a mate, in essence pulling Brona into his world. Ethan is the rare monster who just flat-out murders — and, perhaps, can flat-out die. There’s probably a fun metaphor here about American capitalism, especially in the Wild West: dog eat dog. Kill or be killed. But we’ll leave all that to Season 2.