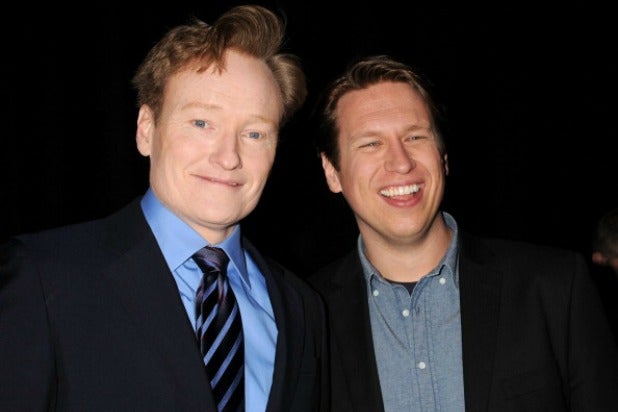 Pete Holmes – whose new show is about to follow “Conan” in TBS’ late-night lineup – looks like a nice young man. And it helps him get away with a lot.

“I’ve gotten onstage to do standup and talked about sex, and said f— and s— and motherf—er, and still old ladies will come up to me after the show and say they love how clean I am,” Holmes told TheWrap.

“Really at the end of the day, it’s not about what you say or what topics you cover or don’t cover or whether I’m doing material about how I love everything, which I don’t, or love everybody, which I don’t,” he explained. “It’s about the host. And if the host comes across as positive or happy… then I’m happy about that.”

Holmes, who cut his teeth hosting with the insightful podcast “You Made It Weird,” counts Conan O’Brien among his fans. We talked to him about their shared roots, the advice he got from the co-creator of “Chappelle’s Show,” and why he picks on superheroes so much.

TheWrap: Nice as you seem, there’s a lot of darkness in some of routines.
Pete Holmes: Yeah, absolutely. I’m grateful for the type of personality that makes whatever I say a little bit more palatable. Because I think that gives us an opportunity to go places where we might not follow another host.

Recently on the Champs podcast, “Chappelle’s Show” co-creator Neal Brennan said he always tells comedians they need to be “cuter.” And he said that included you. How did that conversation go? And is there a comeback along the lines of, “Well, okay, but look who has his own TV show?”
[Laughs.] Neal actually told me specifically to lose weight. He did. But it’s good to have a couple friends like that in your life who will shoot from the hip. I’m grateful for people like Neal. And that was about 50 pounds ago. So I’m not saying Neal made me do that. But I did lose a good amount of weight after that. I don’t know how much of a factor that is. Conan liked me when I was doughier and he likes me now that I’m moderately doughy.

You’re lucky, because you don’t read as doughy. Even if you were bigger, you wouldn’t seem like a big guy.
Oh, thank you. It goes back to I can say mother—er and people still say I’m funny.

How did you settle on a half-hour show?
A half hour was one thing I thought would set us apart. We would have to be faster-paced. We would have to really make the TV show kind of a “best of” everything we wrote and everything we shot. People consume television differently now. I think the show’s going to have a pretty big online presence. So there’s gonna be a lot of stuff where you can watch the extended interview or the longer cut of the thing and then the TV show will just be that really fast-paced, here-it-is kind of format.

You and Conan both come from the Boston area. Do you think that has anything to do with your connection?
My father is pretty bent on the idea that Conan and I being of similar height and being from similar areas has a lot to do with us having similar sensibilities, but that’s a very Boston perspective. … I think it comes down to our approach to comedy. Denis Leary‘s from Boston and so’s Stephen Wright. We run the whole gamut.

Conan and I both agree that comedy should never be boring, but at the same time we don’t really do stuff that’s against people. It’s kind of an inclusive vibe. Even when I do the Wolverine video, which is really just s—ing on Wolverine, there’s an affection there. There’s an affection there when I make fun of Batman. Batman is my favorite superhero, so to turn him into a bumbling idiot really is an act of love.

“The Pete Holmes” show debuts at midnight on TBS.