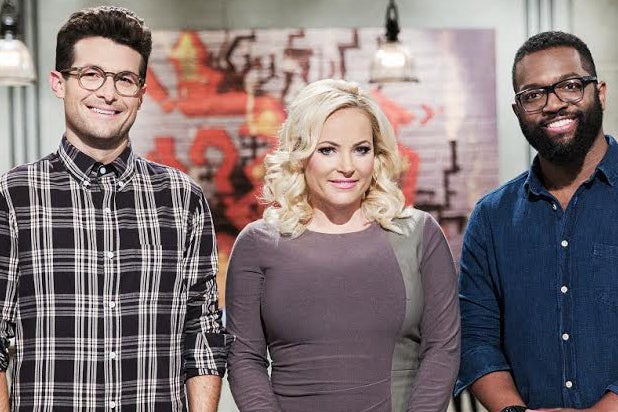 Thurston had just joined the show in October; the hour-long Embassy Row production had aired at 10 p.m. ET on Pivot.

“We thank our hosts and producers, they are incredibly talented and we’re already in discussion to work with them in different ways so that they can continue to have a place on Pivot,” Pivot said in a statement.

The move is not the only recent shakeup at the channel. Now-former president Evan Shapiro left the Participant Media network in November. Kent Rees was named general manager at the time. Shapiro fled for NBCUniversal, where is executive vice president of Digital Enterprises.

Take Part Live premiered in August, 2013 as part of the launch of Pivot TV. It was crafted as a chat fest among millennials for millennials. Megan McCain was the most high-profile member of the cast, joining seven months ago.

Beforehand, she was a frequent guest on cable news. This summer, McCain was part of the round robin of rumors surrounding who would replace then-exiting “The View” hosts Sherri Shepherd and Jenny McCarthy.

Other shows still on Pivot are HitRecord On TV, hosted by series creator and actor Joseph Gordon-Levitt; a crowdsourcing content program where online Internet users create and broadcast their own stories.