A version of this story about “The Power of the Dog” first appeared in the Below-the-Line Issue of TheWrap’s awards magazine.

Jane Campion’s “The Power of the Dog,” her first film since 2009’s “Bright Star,” is set on a cattle ranch in Montana but was filmed in New Zealand. And though the time period is the 1920s, the aesthetic needed to be from a generation earlier, when the stately home in the film would have been built.

“For inspiration, we looked at Theodore Roosevelt’s house, Sagamore Hill in New York, built in the 1880s,” said production designer Grant Major, who had worked with Campion on “An Angel at My Table” in 1990. “Our house was made by characters who were from the eastern U.S. and who came to Montana intending to colonize the place with their sophistication. That idea was a bit misplaced, so by 1920 the house has atrophied.”

While the exteriors were shot in Central Otago on New Zealand’s South Island, the house’s interiors were constructed on a stage in Wellington. That gave Major and Campion a chance to focus on precise details. “We were able to choose everything in that house and make it a place that bolstered the story,” he said. “This big-boned house that’s been gutted, with that brown, leathery feel in all the panel work – it’s all evoking a mood. Even with a bright landscape outside, you know there can be an inner darkness.” 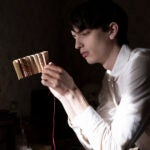 Asked about this reunion with Campion 30 years after their first collaboration, Major said he is a believer in “Saturn return,” the idea that life events can correspond to the ringed planet’s 30 year orbit around the sun. “I was hired by Jane Campion 30 years ago for my ‘An Angel at My Table,’ my first production design gig,” Major said. “Amazingly, I had not seen her since then, until she interviewed me for ‘The Power of the Dog.’ It was awesome to work with her again. And a nice piece of astrological serendipity.”

She had changed little over the three decades, according to Major, in terms of her passion for filmmaking. “Oh, man, ain’t it so. Jane is quite a micromanager in the best way. She was there, boots and all, with the art department, helping us build the house, right from the word go.”

Campion has said that Major is “a legendary New Zealander, so understated, like Edmund Hillary,” the Auckland native who summited Mt. Everest in 1953. “No, no, I don’t think so,” Major demurred, true to form, “but that’s very nice of Jane, nonetheless.”

Also Read:
‘The Power of the Dog’ Ending Explained

But naturally, Campion wanted Major’s input on mountains in pre-production. The production designer saw plenty of those in his work on the “Lord of the Rings” trilogy, which landed him three of his four Oscar nominations and one win (for “The Return of the King”). After much location scouting, including in Montana, New Zealand’s Hawkdun Range and the Ida Valley were chosen as the backdrop for the film’s action.

“Peter Jackson would have probably made the whole mountain range from scratch,” Major said with a laugh, “but Jane wanted this to be a real place. We filmed in the dead center of the south island of New Zealand. That valley is a beautiful, untouched place that could be from the 1920s, kind of a place that time forgot. And Jane was quite keen to underplay the whole visual effects side of things.”

Major also imbued personality into the sets he built, especially two places in the movie that are both private sanctums for the character of Phil. “The barn is all about Phil’s personality,” he said. “Strong, lots of timber in the structure, rooted to the landscape. It’s also quite meticulous in terms of the workshop, where he makes all these model furniture pieces. It’s big and bold and ranch-like, but it’s dark and has this intricate detail on the inside.”

An even more intimate locale is a nearby meadow next to a pond, a place where Phil retreats to be alone, which can only be accessed through a tunnel of driftwood. (There is also a small hut, where Phil keeps secret mementos from his past.)

“Story-wise, the tunnel represents a transition into a different world for Phil,” said Major. “So the design was all very deliberate. We figured that tunnel would have been formed from the way that rivers flood their banks sometimes. There was no lack of rivers like that around New Zealand, so we researched what a natural tunnel like this would look like. We did lots of drawings in advance, and then it was all constructed with real driftwood from big old willow trees that had collapsed. Those big old trees become environments in themselves.”

Big old trees and passageways made in the terra firma certainly hark back to Major’s designs for the Hobbit Shire more than two decades ago. “Yes, there is a magical quality about using nature in this way,” he said. “I love it when trees, whether standing or collapsed, become environments in themselves.

And though the characters in “The Power of the Dog” live on Earth, as opposed to Middle-Earth, Major embraced the mythical qualities at play in the narrative.

“Jane said to me early on, ‘The story and the characters are really just a vessel for the emotional and psychological things that are going on underneath.’ So we were always making creative choices based on this below-the-radar character-forming. And that’s the stuff we go to the movies to see.”