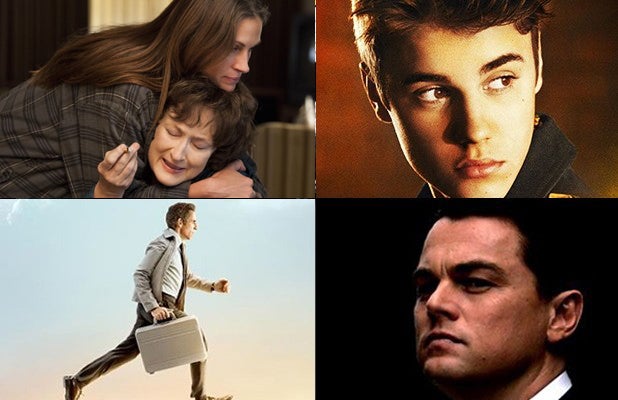 Like an over-stuffed Christmas stocking, Hollywood has loaded up the holiday season with Oscar hopefuls and blockbuster sequels. But could it be too much of a good thing?

If you’re a moviegoer, the answer is absolutely not. With so many movies in the marketplace, there should be something for just about everyone, and the biggest problem could be long lines.

But for the studios, the holidays could bring back memories of this summer, when a handful of big movies got lost in the shuffle and flopped despite booming overall business. In fact, so intense was the competition that executives like Viacom CEO Philippe Dauman publicly said that a glut of big-budget films ended up cannibalizing each other and taking a bite out of ticket sales.

Perhaps bowing to the need for breathing room, two big films — the George Clooney World War II drama “Monuments Men” and “Jack Ryan,” the Chris Pine thriller based on the Tom Clancy novel — have been pushed into early next year by Sony and Paramount, respectively.

“This past week, two films moved from the Christmas season and one fell in allowing more room for films to share an audience in the crowded season,” Nikki Rocco, president of Universal Pictures distribution, said. “We hope that the market place expands to allow success for all films playing during that time.”

“The holiday season is almost always the heaviest movie-going time of the year, but there are limits, and we’re pushing them this year,” Exhibitor Relations vice-president and senior analyst Jeff Bock told TheWrap.

Between the Dec. 13 debut of Warner Bros.’ “The Hobbit: Desolation of Smaug” and the Christmas holiday, there will be eight wide releases, roughly the same number as last year’s unusually packed Yuletide season. The second installment in Peter Jackson’s trilogy is expected to do massive business, and “Anchorman: The Legend Continues,” with Will Farrell reprising his role as Ron Burgundy, comes out via Paramount the following weekend.

On that same Dec. 18 weekend, Disney will be going wide with “Saving Mr. Banks,” the Tom Hanks-Emma Thompson tale of the making of “Mary Poppins,” Sony will expand David O. Russell’s star-studded Oscar drama “American Hustle” and CBS Films will do the same with its Coen brothers’ comedy “Inside Llewyn Davis.”

And then the holiday crush really begins.

Of these, “The Hobbit” and “Anchorman” sequels look to best positioned to rule the box office, while films like “Walter Mitty” and  “The Wolf of Wall Street” will be more dependent on good reviews and word-of-mouth to break out of the pack.

Many of these films will be banking on audience of adults, who analysts say have demands on their time and wallets that could prevent them from going to see more than one or two pictures during the Christmas season.

“There are only so many nights you can get a babysitter,” Ben Carlson, president and co-creator of the social media research firm Fizziology, told TheWrap. “Last year there was a glut of older-skewing movies in October and November like ‘Flight’ and ‘Argo.’ This year there hasn’t been the same kind of stack up of adult dramas. Instead they’ve been back-loaded into December.”

There’s still several weeks between now and the holidays, and two certain blockbusters – Disney’s “Thor: The Dark World” and Lionsgate’s “Hunger Games” sequel “Catching Fire” — will roll out before that time.

“Those are going to be monsters hits, so even if the Christmas week does turn out to be too crowded, the year could still be a record-breaker,” said BoxOffice.com editor-in-chief Phil Contrino.

They also may help whet appetites for the deluge of Oscar-bait films, action movies and sequels that will be crowding into theaters in December. The key, studio and film executives insist, is providing something to fit all demographics. Many feel that kind of variety has been accomplished with the possible exception of family releases, which are looking a little light aside from “Walking With Dinosaurs,” a 3D film about the reptiles that once ruled the earth.

“Things are lining up for it to be a really diverse holiday season, but at the end of the day you need your lead off hitter to get on base and it looks like ‘Hunger Games’ is going to fit the bill,” Greg Foster, chairman and president of IMAX Entertainment, told TheWrap.

After the highest-grossing summer ever and a fall that ran a little below last year’s, the overall box office is essentially flat with last year right now.

If 2013 is to break the domestic benchmark of $10.8 billion set in 2012, a big holiday season like last year’s, when “The Hobbit: An Unexpected Journey,” “Les Miserables” and “Django Unchained” pushed it over the top, would help a lot. That would be quite an accomplishment, given that 2013 is the first year in nearly a decade without a new installment in such Tiffany franchises as James Bond, Spider-Man, Harry Potter, Transformers or Batman.

“There was a lot of competition last year too, and the market expanded to accommodate it, and I think that’s what will happen this year,” Contrino said.

If it does, Hollywood’s Christmas gift could be a new record.