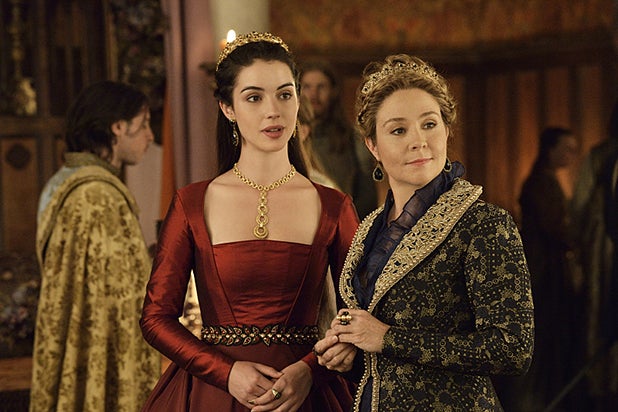 There’s been no love lost between Mary, Queen of Scots and her mother-in-law on “Reign.” And just because Mary’s about to become Queen of France, that won’t be changing any time soon.

Ahead of Thursday’s big coronation episode, TheWrap spoke to Megan Follows, Queen Catherine herself, about the big day. The coronation will see not only Francis (Toby Regbo) and Mary (Adelaide Kane) ascending to power, but Catherine losing most of hers.

As always, Catherine is well aware that image is everything. The crowing of the new king and queen of France will be “quite an extravaganza,” said Follows. “Not only to honor my son but also to not let anyone perceive the seriousness of our real situation, politically and due to the new crisis building, which is a famine.”

And Catherine will once again butt heads with the new rulers.”I’m a bit at odds with my son and his wife on how to rule,” Follows teased.

Of course, Catherine and Mary have always had a contentious relationship. Now that Mary is queen and Catherine has been relegated to queen mother, that won’t change, though there is a begrudging respect for the younger woman after all they’ve been through together.

“I think that at this point, I embrace Mary,” Follows said. “It also depends on whether we’re in agreement in our views on a certain topic. From Mary’s point of view, it’s kind of a ‘keep your enemies close’ sort of thing. We probably feel that way about each other, but I do feel there’s a maternal instinct there. I want to offer her wisdom and share my experience. I also recognize that she may actually be a stronger spirit than Francis.”

So what will happen when another daughter makes her way back to court? “Francis’ sister, she’s coming back,” Follows revealed. British actress Rose Williams has been cast to play Princess Claude, who will return to court in Season 2. “She and Catherine butt heads, for sure. In doing those scenes, what I found most interesting was that different set of rules apply between a mother and a son and a mother and a daughter.”

It’s fitting  that yet another relationship between females in power will be adding drama to “Reign,” which features a predominantly female cast and has been heralded for its handling of female empowerment and identity.

“I’m not sure [if Catherine is a feminist],” Follows mused. “She’s really had to always have her power in the  shadow of other people. She’s very much geared to getting her sons into positions of power. She’s far more geared to protecting them than she is honoring Mary. She’s very complicated that way.”