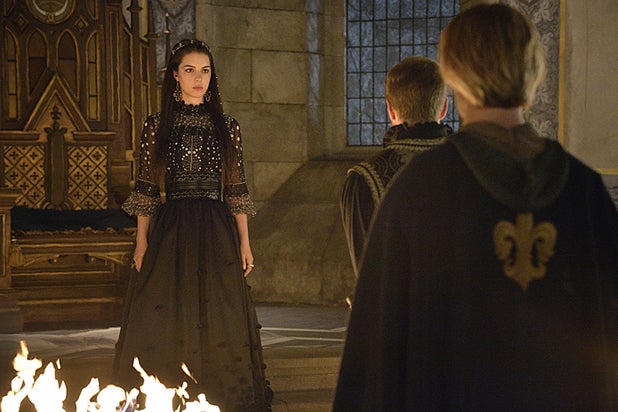 The CW’s “Reign” returns for its second season on Thursday, and executive producer Laurie McCarthy and star Adelaide Kane were eager to spill some secrets about what’s ahead for Mary, Queen of Scots.

Season 1 of “Reign” left off on quite a cliffhanger as Francis (Toby Regbo) secretly killed his father and became the new King of France. He then promptly left his castle and his queen to tend to her best friend Lola (Anna Popplewell), who was about to give birth to his child. All this as a resurgence of the Black Plague was heading towards France, leaving Mary (Kane) no choice but to lower the castle gates even though her husband was on the other side of it.

At a recent screening of the Season 2 premiere episode, McCarthy and Kane answered journalists’ burning questions about Francis, Lola and the baby that could change everything, why there are bigger threats for our favorite royals out there than the plague, and whether Season 2 will be as sexy as the first season.

Here are five of the biggest revelations:

1. The royals have more than just the plague to worry about.
While season 1 left off on a cliffhanger with a resurgence of the Black Plague spreading rapidly towards French Court, Mary and Francis will have bigger problems as the season progresses.

“The cliffhanger threat was the plague,” said McCarthy. “But the threat of the season really is what lies beyond the castle and that’s the power structure of France at the time, where power really lied with the nobles.”

The plague, which kicks off the season premiere, is more of a thematic threat than literal. “I wanted to do the plague as something other than ‘who’s going to die and who’s going to live,'” McCarthy said. “I wanted it to be a launching pad for the framework of the environment that we’re going to be living in for the next year.”

Also read: ‘Reign’ Review: A Girlier ‘Game of Thrones,’ With Less Sex Than You Might Be Expecting

But don’t worry, the plague is still literally deadly. At least one character we’ve met before won’t make it past the season premiere.

2. Franics and Lola’s baby won’t bring out the maternal instincts in Mary.
In fact, the new baby in court will only serve to remind Mary that not only did her husband sleep with her best friend, she herself has not become pregnant, despite this being a central responsibility of being queen.

“Mary’s always trying to be the bigger person,” said Kane of her character. “Trying to push past it and do what’s right for everyone. I think as the season progresses, having the child around becomes more and more of an unspoken pressure for Mary as she fails to conceive… The longer she goes without having a child, the more that’s going to weigh on her and become a divisive factor in her relationship with Francis.”

However, the baby will have one unlikely fan. “Here’s the weird thing about Catherine is she loves babies,” McCarthy teased.

3. New noblemen and new conflicts are heading to court.
The Season 2 premiere will introduce two new characters, Lord Stefan Narcisse (Craig Parker) and Lord Louis Conde (Sean Teale), who will come to play larger roles as the season goes on. At first, the two appear to be on opposite sides of the spectrum. “Are they though?” Kane teased.

“Narcisse is obviously introduced as a villain, he’s a very powerful Catholic noble,” McCarthy divulged. “And Conde’s brother is a Protestant leader. The two of them are really going to be the face of the conflict that we’ll be playing.”

4. Catherine will be going through some changes.
The former queen of France is now a mere Queen Mother and she may have trouble giving up the crown, though since it’s her own son inheriting the power, she’ll try her best.

“She’s still one of the most powerful people in the realm,” added Kane. “By what she’s done and just money. She may not sit on the throne anymore but that doesn’t mean she’s not still holding the purse strings.”

She’s also dealing with guilt over all the atrocities she’s committed over the years in the name of protecting herself and her family. “She’s a good Catholic,” said McCarthy.

“And I firmly believe this is a character who believes she’s going to hell. She might start to feel the flames of hell a little bit this season.”

Catherine will also become embroiled in more family drama — outside of Francis and Mary. An estranged daughter will make her return to court this season, bringing another fraught relationship to the forefront.

And the Queen Mother will have a new lover in her life now that she’s single and no longer ruling a country.

“Reign” caused controversy a couple of times over the course of its first season when more explicitly sexual scenes were trimmed from broadcast, and the show will continue to push the envelope as far as sex goes on Season 2.

“Sexuality is a huge part of this show,” said McCarthy. “It’s just a big part of life, especially when… you know, there are people who don’t really have jobs. They’re just kind of hanging out. But it’s also tied to power and the relationships between men and women.”

And the two aforementioned new men in court will have much to do with that as well. “Conde doesn’t have a problem being with married women,” teased McCarthy. “And Narcisse will have a surprising sexuality to him.”