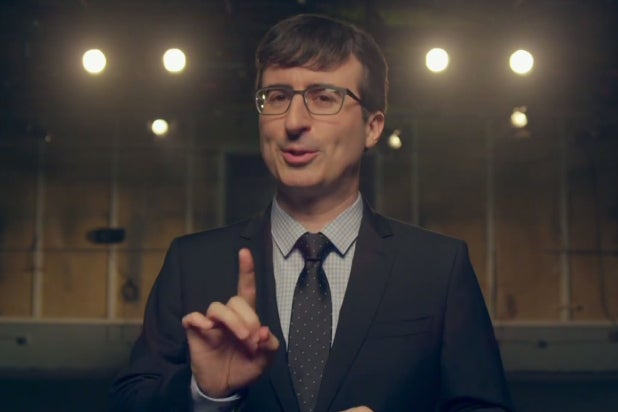 HBO’s “Last Week Tonight With John Oliver” has a lot going for it: John Oliver is brilliant. And HBO has given him the freedom to do a news-based comedy show with more depth than most straight news shows.

Oliver’s Sunday-at-11 p.m. timeslot gives him an entire week to process the week’s events, and in his first episode, it was obvious that he and his team are putting a lot of thought into what they do.

What Oliver could use more of are jokes. Comedy Central’s “The Daily Show,” which Oliver adeptly hosted last summer, works because it mixes silliness with wonkery. Whenever things get confusing, Jon Stewart throws in something self-deprecating or ludicrous to remind us he doesn’t take himself too seriously and is on our side.

In its first episode, “Last Week” felt like an investigative version of “Weekend Update” on “Saturday Night Live.” “Update” is funny, but because of its broad audience, tends to go for ad hominem jokes (Chris Christie is fat) rather than anything close to genuine political satire. “Update” is kind of a pressure valve, allowing us to make fun of these politicians we’re stuck with. Stewart and Stephen Colbert, on the other hand, demand that our politicians be better.

Oliver is obviously in their camp – the sharper, more ambitious, and ultimately more hopeful one. He complains because he knows we could be better than we are. He has concrete ideas – lots of them – for improving our politics, media coverage, and even government food labeling.

“Last Week” consists mostly of Oliver sitting alone at a desk, talking. At the end of Sunday’s episode, he also interviewed former NSA director Keith Alexander. The fact that so much of the show relies on Oliver means he bears the burden of getting the tone exactly right. And right now, he’s a little more angry than funny.

Training his fire on the government and media, he had a lot of easy targets, and he picked them off effectively. But his touch isn’t as light as it was on “The Daily Show.” Stewart and Colbert tell more jokes, which makes us more receptive to their very specific, often searing insights.

Oliver’s best joke so far is his honesty: He tells it like it is in a way he couldn’t on Comedy Central. As he noted in a visit to “The Daily Show” last week, there’s a “strange beeping sound” on basic cable whenever someone curses.

My favorite moment Sunday came during a segment on food labeling, in which he played an ad for Pop Tarts that tries to re-brand the frosted sugar wafers as a fruit-filled, healthy breakfast. We watched the ad, and then cut back to Oliver, who said simply:

It was great. But he can only do it once. Now he has to keep finding more inventive, even whimsical ways to say “fuck you,” so that the show doesn’t just turn into a man behind a desk complaining.

When Oliver doesn’t choose his battles, he can slip into sanctimony. At one point Sunday, he blasted the U.S. media for paying more attention to an escaped tiger in India than to India’s presidential election, in which a candidate linked to deadly rioting is the lead candidate. Oliver suggested it was somehow a failure of the Western media that Indians may elect a candidate who seems potentially dangerous.

“We should care about this story!” he insisted.

One problem, he explained, is that Indian media outlets are taking too many cues from the West. He noted that CNN in India used the title “One Billion Votes” for a story about the election, and that India actually has 800 million voters.

“Their own graphic is wrong by the entire population of Brazil,” he said.

That was a solid hit. Blaming the Western media for the decisions of the Indian electorate is not. Oliver isn’t going to get Americans to worry about India’s elections. We barely worry about our own. The outrage felt off.

So was a segment that noted that John McCain has told the same joke — “Russia is a gas station posing as a country” — at least six times. Every politician repeats jokes. It’s okay.

Oliver was at his satirical best when he got Alexander to talk about how the NSA can shake its well-deserved reputation for domestic spying. He suggested it re-brand itself as “Mr. Tiggles,” a cute kitten in a boot, to avoid all those associations with domestic spying. Alexander came up with a scarily good slogan, saying the NSA was the only government agency “that really listens.”

It was light, funny, absurd — and made us care about this story.