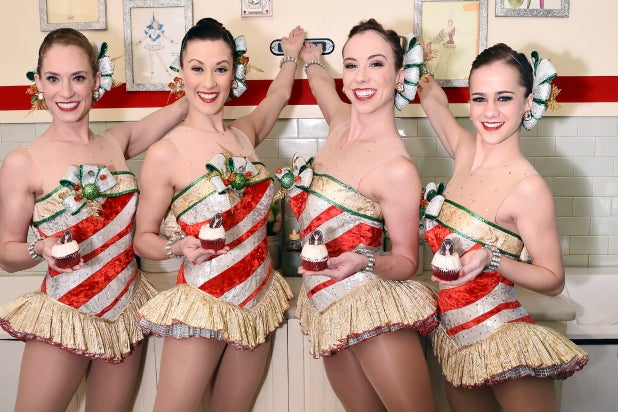 The Rockettes at Magnolia Bakery Rockefeller Center on December 8, 2015 in New York City.

Online backlash is in full swing over the Radio City Rockettes allegedly being forced to perform at Donald Trump’s inauguration, but the company that manages the New York City dance group says those folks have got it all wrong.

According to the Madison Square Garden Company, the Rockettes don’t actually have to perform at the event if they don’t want to.

“The Radio City Rockettes are proud to participate in the 58th Presidential Inaugural,” management said on Friday. “For a Rockette to be considered for an event, they must voluntarily sign up and are never told they have to perform at a particular event, including the inaugural. It is always their choice. In fact, for the coming inauguration, we had more Rockettes request to participate than we have slots available. We eagerly await the inaugural celebrations.”

That seems to somewhat contradict what the Rockettes’ union, the American Guild of Variety Artists, said in an email, which was obtained and authenticated by BroadwayWorld.com.

“We have received an email from a Rockette expressing concern about getting “involved in a dangerous political climate” but I must remind you that you are all employees, and as a company, Mr. Dolan obviously wants The Rockettes to be represented at our country’s Presidential inauguration, as they were in 2001 & 2005. Any talk of boycotting this event is invalid, I’m afraid.”

“We have been made aware of what is going on Facebook and other social media, however, this does not change anything unless Radio City has a change of heart. The ranting of the public is just that, ranting. Everyone has a right to an opinion, but this does not change your employment status for those who are full time.”

“This has nothing to do with anyone’s political leanings (including AGVA’s), it has to do with your best performance for your employer, period. I will reiterate that if Hillary Clinton was the President-elect, nothing would be different, and there would probably be those who would not want to be involved because of her. It is a job, and all of you should consider it an honor, no matter who is being sworn in. The election is over and this country will not survive if it remains divided.”

“Everyone is entitled to her own political beliefs, but there is no room for this in the workplace.”

“If you are not full time, you do not have to sign up to do this work. If you are full time, you are obligated. Doing the best performance to reflect an American Institution which has been here for over 90 years is your job. I hope this pulls into focus the bottom line on this work.”

The email was “written and sent by a high-ranking member of the union’s administration,” per the website.

When TheWrap asked MSG to clarify the contradictory nature of these two statements, a spokesperson for the company said, “We’re not saying anything beyond the statement.”

However, one insider at MSG assured us that this is “business as usual,” and “the women are never compelled to perform — not for any event, including the inauguration.”

The AGVA did not immediately respond to TheWrap’s request for comment.

Comedian Patton Oswalt and “Ghostbusters” director Paul Feig are among those in Hollywood advocating on behalf of any Rockettes uncomfortable with performing at the presidential inauguration.

Thank you for this, @duarteamanda. Already sent my e-mail. Everyone else please do likewise? pic.twitter.com/WOgcvaJqoy

Sent mine too. Please reach out and let the producers know that no performer should forced into any situation they are not comfortable with. https://t.co/tqt8pnzGpB

Others are using Twitter to tell the Rockette(s) in question to stop “whining” and “do your job” — read that side’s opinions here.