Like the burst of a roaring drag race, Lola Quivoron’s first feature “Rodeo” will shake you out of your seat with its angry, kinetic force as it follows a young woman who forces her way into a street gang that rides motorbikes (hard), steals and lives on the edge.

Playing in the “Un Certain Regard” section of the Cannes Film Festival, the film premiered to a lengthy standing ovation on Thursday, with the jury joined by a sprawling cast made up mostly of the men of the “B-More” crew who fix, steal and ride bikes as a full-time obsession.

The French director moves her camera right up close into the face of her protagonist, newcomer Julie Ledru (“Julia”), a wild child with a face of world-worn injury and unruly hair to match. In the opening scene. she is like an uncaged animal, racing along the hallways of her rundown public housing building, through the apartment, back down the stairs and into the passenger seat of a beat-up van, where she demands the men give her a ride.

It’s a bracing introduction that matches the energy that drives the film, as young men riding motor bikes on the streets like 21st-century stallions, doing heart-stopping wheelies and death-defying tricks in joyous release and defiance of the law. 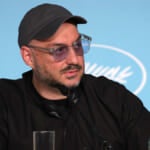 Julia is a misfit in this group, and the only woman who dares to join the gang. But she is good at stealing bikes, and finds her spot in this world of tension and crime. In her notes on the film, Quivoron said she was drawn to casting real-life biker Ledru as her “thug” protagonist. “She quickly understood the complexity of this character who is at the same time troubled, violent, manipulative,” Quivoron said. “Like me, she has difficulty identifying herself as feminine or masculine. Julie, Julia and I are ‘nonbinary’ beings. Then, from the moment the actor meets her character, you can do anything, you just need to have a little confidence and let yourself be guided.”

Quivoron explored the motorbiking subculture in a short (“Au loin, Baltimore”) she made while a student at Paris’ La Fémis films school. “What is this practice? Why do they do it? Who are these young people?” she wrote in her film notes. “Since 2015, I have never stopped spending time in this environment, and documenting it, with clips, short films, or photo reports.”

The long-time research shows in the naturalness of the actors’ performances. And Quivoron’s vérité style — and whole-hearted embrace of the female gaze — brings you into a world of hazy edges and hyper-closeups.