Kirill Serebrennikov, the director of Cannes competition title “Tchaikovsky’s Wife” and the only Russian director with a film in this year’s official festival, on Thursday called for world governments to lift sanctions on a Russian oligarch and film financier who has been reported to be helping the Ukraine war effort.

The oligarch is Roman Abramovich, who is behind the film fund Kinoprime that helped to finance both “Tchaikovsky’s Wife” and Serebrennikov’s prior film “Petrov’s Flu,” among other Russian art-house films. Serebrennikov, who said he did not receive money from the state to make “Tchaikovsky’s Wife,” defended Abramovich’s work as saying that the films he funds are not propaganda movies but are “rather the contrary.”

“We have to lift the sanctions against Abramovich,” the director said during his Cannes press conference. “He helps modern art, and he has for a long time now. He’s a real patron of Russia and that’s been deeply appreciated. Thanks to him, we have art-house cinema.” 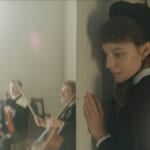 Serebrennikov is a Russian dissident who has previously criticized Vladimir Putin and was even placed under house arrest. But crucially, Serebrennikov also pointed out that Ukrainian president Volodymyr Zelenskyy had previously asked U.S. President Biden specifically not to sanction Abramovich and that the oligarch had worked to help Ukraine because of his ties to the film industry.

Serebrennikov also more broadly advocated against the outright banning of Russian culture as a way to protest the war. “We should avoid boycotting theater, cinema, on the contrary this is what makes people feel alive,” he said. “Boycotting Russian culture strikes me as unbearable. Russian culture has always promoted human values visa vie people’s souls. Russian culture has been anti-militaristic. People who trigger wars throw people in the trenches and they’re not interested in people’s pain.”

Neon acquired the North American rights to “Enys Men,” a horror film from director Mark Jenkin (“Bait”) that is premiering in the Director’s Fortnight section of Cannes.

Mary Woodvine and Edward Rowe star in the film that was shot on 16mm color negative using a 1970s clockwork Bolex camera and post sync sound and was made to give the feel of discovering a mysterious old roll of celluloid. Inspired by “Don’t Look Now,” “The Wickerman” and “Straw Dogs,” the film is set in 1973 off the British coast at an uninhabited island and follows a wildlife volunteer who descends into a journey on the island that challenges her grip on reality.

Toho will release Shinkai’s film in Japan on November 11; the film will then be rolled out in all major territories in early 2023, with Crunchyroll being the film’s sole distributor in North America. The company will partner with Sony Pictures and Wild Bunch International on other non-Asian territories.

“Suzume no Tojimari” is a coming-of-age story for a 17-year-old girl, Suzume, who visits various disaster-stricken locations across Japan and must close mysterious doors that are causing the devastation. Read more here. 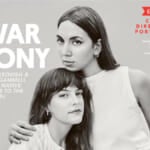