These words, said during the show-stopping number “Naatu Naatu” from the epic Indian blockbuster “RRR,” have reached the ears of audiences and have sparked dance-offs in theaters from Chennai all the way to Hollywood. And now those words are a part of Oscar history as “Naatu Naatu” has become the first nominee for Best Original Song to come from an Indian film.

“I’ve seen so many people get carried away with the emotion of the song. It’s a frenzy,” “RRR” composer M.M. Keeravaani told TheWrap. “Seeing so many people going to the front of the theater to dance and clap and stomp with the song is just like winning an award.” 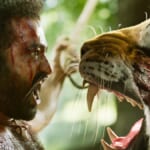 Written by Keeravaani with lyrics by Chandrabose, “Naatu Naatu” was an immediate hit in India when it was released even before “RRR” opened in theaters in November 2021 with the official lyric video racking up 143 million YouTube views.

But once the film was released, it became a cultural sensation, with fans of lead stars Ram Charan and N.T. Rama Rao Jr. throwing confetti and dancing along in theaters as the pair danced to the thumping rhythm of “Naatu Naatu.” As the film built a cult following in Hollywood, screenings of the film also turned into a big party when “Naatu Naatu” started playing.

Keeravaani composed seven songs for “RRR,” each key to advancing the film’s epic story, an alternate history that imagines what would have happened if famed revolutionaries Rama Raju and Komaram Bheem had met during the British Raj in the 1920s. Ram and Bheem become the deepest of friends as they each secretly advance their plans against Britain’s imperial rule, unaware that their plotting is leading them on a collision course that could destroy the bond they have formed.

Those stakes are turned into song with “Dosti,” a Keeravaani number that plays after Rama and Bheem meet for the first time and save a young boy from a train wreck. Keeravaani gives the song a simple, rhythmic chant befitting the larger-than-life nature of the film’s protagonists while expressing the dread of what is to come, as Rama doesn’t yet know that the Gond warrior he is trying to capture to win the favor of the British is none other than Bheem.

To capture those emotions, Keeravaani says he was inspired by his own fear of flying, and connected the mixed emotions that he feels when he gets on a plane to what he wants the audience to feel as “Dosti” plays.

“When composing it, I imagined myself on a 16-hour flight from Dubai to Los Angeles. Even when soaring high in the sky and enjoying the view from the window, I still have this sense of danger because of my flying phobia,” he said. “So I came up with this slow, rhythmic theme for ‘Dosti’ that feels like a sleeping volcano, and you can feel the lava inside, churning and churning, just like how this friendship between these two men is going to lead to a battle of betrayal.”

Keeravaani finds himself on a nominee list with some of the biggest pop stars in the world, including Lady Gaga, who is nominated for the “Top Gun: Maverick” song “Hold My Hand,” and Rihanna for the “Black Panther: Wakanda Forever” song “Lift Me Up.” David Byrne and Diane Warren are also nominated for their songs for “Everything Everywhere All at Once” and “Tell it Like a Woman.” 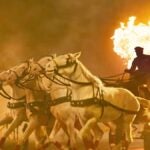 Also Read:
Can You Spot the Fake Horses? ‘RRR’ Visual Effects Team Breaks Down How Hundreds of Animals Were Created

But there’s a chance that “Naatu Naatu” might beat them all, as Keeravaani has already secured a victory at the Golden Globes and has grabbed the attention of Hollywood with his infectious, upbeat tune. And regardless of whether he wins, there’s now a very good chance that the song will get a live performance onstage at the Dolby Theater during the Oscars broadcast.

“For me, ‘Naatu Naatu’ isn’t just a song. It’s a whole package of emotions,” Keeravaani said. “This nomination is an achievement of the entire team, from [director] S.S. Rajamouli to the performers and the crew and my entire music team. I’m like a mouthpiece for all of them.”