A judge from the magistrate court for New Mexico approved the request for the warrant on Thursday from the Santa Fe Sheriff’s Office and obtained by TheWrap, and investigators will look at any messages, photos or contacts that are pertaining to “Rust,” for which Baldwin served as one of the film’s producers.

“Affiant believes there may be evidence on the phone, due to individuals using cellular phones during and/or after the commission of crime(s),” the affidavit from Det. Alexandria Hancock attached to the warrant reads. “Such information, if it exists, may be material and relevant to this investigation. Affiant was also made aware there were several emails and text messages sent and received regarding the movie production ‘Rust’ in the course of interviews.”

The affidavit also includes some new details about the investigation, including that police had searched the phone of “Rust” armorer Hannah Gutierrez-Reed, which included photographs of receipts for various Santa Fe businesses, as well as a look through Hutchins’ phone that included conversations about “Rust” dating to July 14. Investigators believe they’ll have to gather information from prior to the start of filming for a thorough investigation.

It also includes some details of Baldwin’s interview with police, including emails back and forth between Baldwin and Gutierrez-Reed about different styles of period guns, with Gutierrez-Reed presenting him with a few different options and handles.

Baldwin said in his recent interview with ABC News that he was told it was “highly unlikely” that the ongoing investigation into Hutchins’ death would lead to charges against him, but investigators still have not ruled anyone out from facing charges and the investigation remains ongoing. 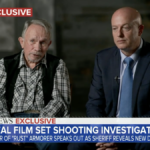 Hutchins was killed on the set of “Rust” in New Mexico on Oct. 21 after a gun held by Baldwin and containing a live round fired, fatally wounding her and injuring the film’s director, Joel Souza. Baldwin had described in detail in his ABC News interview that he did not pull the trigger of the gun but that he “let go of the hammer of the gun, the gun goes off.”

“Someone is responsible for what happened, but I know it isn’t me,” Baldwin said in his interview.