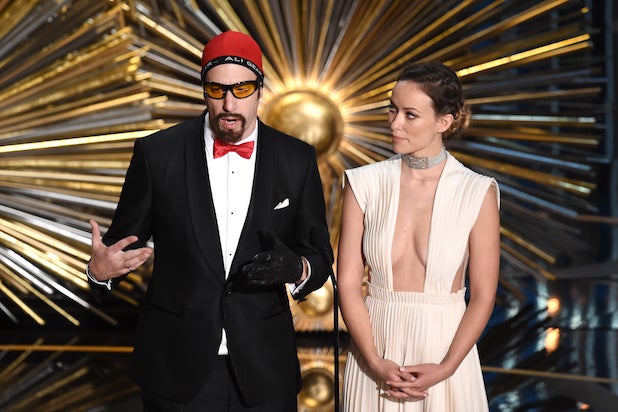 The Oscars got a surprise presenter Sunday when Sacha Baron Cohen revived Ali G — calling himself a “token black presenter.”

In the year of #OscarsSoWhite, Ali G praised the hard work and great accomplishments of people of color — including “very hard looking little yellow people with tiny dongs.”

Before anyone got upset, he meant the Minions.

Cohen, who stars in next month’s “The Brothers Grimsby,” has been going down character memory lane lately. In December he revived Borat on “Jimmy Kimmel Live.”

Cohen first debuted Ali G in Britain’s “11 O’Clock Show” in 2000 before he transitioned to HBO’s “Da Ali G Show” alongside the Borat and Bruno.

Cohen recently appeared on Marc Maron‘s “WTF” podcast to talk about the allegations of racism Ali G inspired when British reporters realized Cohen was white — until they ultimately decided he wasn’t racist after all, he said.

Ali G, he explained on the podcast, considers his own background boring, which has led him to adopt stereotypical African-American mannerisms.