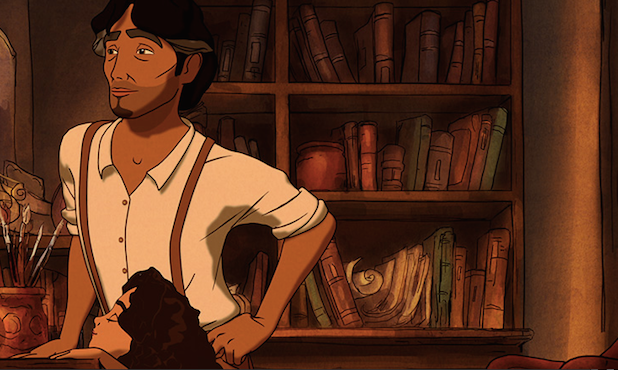 When -Pinault  is passionate about something, you know it. The actress and activist has produced an animated project called “Kahlil Gibran’s The Prophet,” which premiered at the Toronto Film Festival this weekend. The film, directed by Roger Allers (“The Lion King”) brings a message of inspiration, humanity and peace from the Lebanese poet whose book has sold millions of copies since its publication in 1923. Hayek spoke to TheWrap‘s Sharon Waxman about producing and how to point the world in a more peaceful direction.

TheWrap: It’s a time when the world seems so unpredictable and dangerous, why did you want to make this film?
Salma Hayek: There are different levels to it — there’s the personal, it was interesting to bring the words of Kahlil Gibran, who is a Lebanese philosopher, writer, author, poet, to bring different cultures together. The book has sold more than 100 million copies around the world. I thought it was interesting that this poet of Arab descent was so loved around the world. He was Lebanese-Christian but he does not preach Christianity, it’s non-religious and non-political. It goes to the core of humanity.

So you decided to do this as an anthology, with different animators interpreting the stories in their own way?
If you can bring cultures together, you’re giving the child a story that will surprise them, show them a different place, the mind of a different artist, and for adults to watch a movie that is nostalgic.

You’re not meant to hear the poem, to understand the poem. You’re meant to connect with one phrase, one image, and remember that you’re present in this moment. I don’t know which is the image, it should be different for everyone. We attempted to make a unique experience that celebrates our differences.

Do you think people are prepared to hear a message of peace and universality, especially in the Middle East?
They (the Doha Film Institute, which financed the film) were very brave. There was no script, there were no images. We didn’t know which poems, and different animators.

It’s very brave of this country to expose their children to a message of universality. And to encourage them to creativity, to imagination, to visual escape, to explore their inner selves. One of the children that might see this film will be the new Nelson Mandela, the new Gandhi. This is the only way we can come out of hate — with one inspired thinker who can connect to the greatness within us. And this is an important feeling.

We need to be reminded that we are all human beings who share values. We all love our children, we all have relationships with nature, love, marriage.

Participant and Doha financed the film. Has there been interest in buying it for distribution?
We don’t even have a buyer yet because there’s nothing harder to do than to be out of the box. There’s so many of us not in the box, and we are sick and tired of watching the same thing over and over again with different actors. There’s a lot of us — we want to be inspired, to be hopeful, challenged, surprised. We want to see something we haven’t seen.

Maybe it’s naïve, maybe it’s too sentimental. We have to give ourselves the opportunity to be naïve and not cynical. Respecting the view of an artist. From a region that wasn’t respected at the time. I haven’t found a buyer yet. I will.