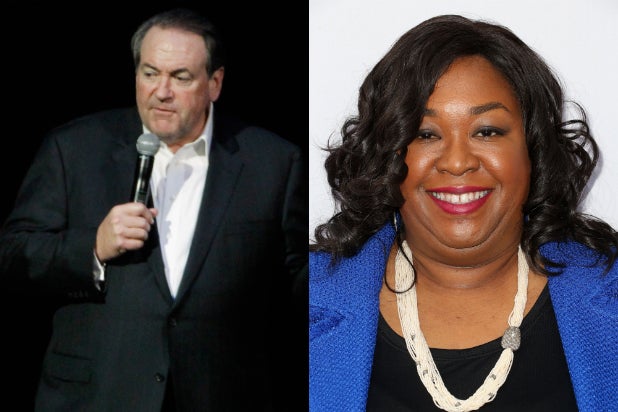 “I want Mike Huckabee to wake up tomorrow having suddenly grown a vagina,” Rhimes wrote on WhoSay.

“Then I wanna deny his vagina proper medical care and birth control while making crazy statements about his libido. And see how he likes it.”

I want Mike Huckabee to wake up tomorrow having suddenly grown a vagina. Then I wanna deny his vagina proper medica… http://t.co/afzaThpIij

Also read: ABC Orders Shondaland Pilot ‘How To Get Away With Murder’

Rhimes was referring to comments Huckabee made at the Republican National Committee winter conference in Washington, D.C. on Thursday, where he said Democrats unfairly painted the GOP as waging a war on women.

“Our party stands for the recognition of the equality of women and the capacity of women. That’s not a war on them, it’s a war for them,” he said.

“And if the Democrats want to insult the women of America by making them believe that they are helpless without Uncle Sugar coming in and providing for them a prescription each month for birth control, because they cannot control their libido or their reproductive system without the help of the government, then so be it,” Huckabee added.

Rhimes wasn’t the only one to take offense to the remarks. Actresses Sarah Silverman and Lizz Winstead said on MSNBC’s “Now With Alex Wagner” that the comments threatened their sexual health.

“It’s so bizarre,” Silverman said. “When a politician is speaking on behalf of those people who are pulling their strings, for their purse and for the … betterment of their career, it’s gross.”

“We have to stop feeding into this narrative that it’s somehow awful to be a sexual being,” Winstead said.

“It’s total hypocrisy. I mean, these are people who are anti-big government and yet they want to make laws about my vagina and what I do with my body,” Silverman added.

Also read: 10 Things We Learned About Sarah Silverman on Reddit

Even the White House objected to Huckabee’s remarks.

“I haven’t seen that report, but whoever said it, it sounds offensive to me and to women,” White House Press Secretary Jay Carney said at Thursday’s briefing.

In a statement to TheWrap, Huckabee said the comments to which Rhimes and others have reacted were taken out of context and missed the point of what he was trying to say about how Democrats regard women:

“Ms. Rhimes’ comment seems to be directed at the misquotations of my speech which were made by certain members of the media. Even they were forced to admit they got it wrong and had to issue a correction. Maybe Ms. Rhimes will issue a correction as well.

As a strong, and powerful woman, I believe Ms. Rhimes would agree that women are not helpless, and they have the capacity to manage their lives without the intervention of big government. The real scandal is the fact that Democrats continue to portray the women of America as helpless victims of gender who need government assistance in order to manage their reproductive systems. I think far more highly of women than that.”

Watch the video of Huckabee’s remarks below: