With little fanfare and no warning, the new “Scream” movie is suddenly available to stream exclusively on Paramount+.

While Paramount Pictures had previously announced that Paramount+ would be the exclusive streaming home for most of its films after a 45-day theatrical window, a specific streaming release date was not revealed for “Scream.” And just like that, you can now stream the fifth film in the horror franchise freely on Paramount Plus. 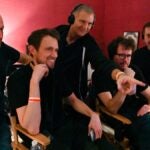 Also Read:
Filmmakers Radio Silence on What It Was Like for the Biggest ‘Scream’ Fans to Make a ‘Scream’ Movie

The movie was released on Digital on March 1 and is available to rent for those who don’t subscribe to Paramount+. It will also be released on 4K, Blu-ray and DVD with a bevy of bonus features on April 5.

“Scream” was a box office hit when it opened in January, becoming the first film to dethrone “Spider-Man: No Way Home” from the #1 spot. The worldwide total for the R-rated film currently stands at $138.6 million, and Paramount and Spyglass Entertainment quickly greenlit a further sequel with the same directing team coming back for “Scream 6.”

“Scream” will soon be joined on Paramount+ by “Jackass Forever,” another box office success that will likely appear on the streaming service without warning.