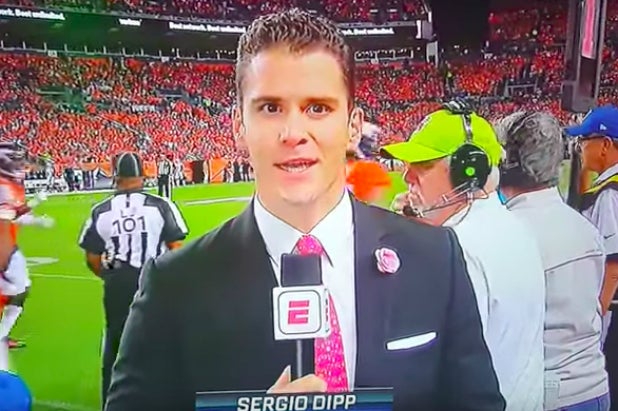 Forget football — are you ready for some more Sergio Dipp?

Of course you are, and the ESPN Deportes reporter is clearly eager to get back in the game and in front of the cameras. So when will he get a shot at redemption after his disastrous “Monday Night Football” debut? Well, we’ve got good news and bad news.

On the plus side, cable subscribers can next catch Dipp sooner than you might think: Wednesday, as a matter of fact. However, he’ll just be back on ESPN Deportes from Mexico City, with a “SportsCenter” assignment at noon ET.

Unfortunately, Dipp is not currently on the “Monday Night Football” schedule for the rest of the NFL season, TheWrap has learned. Lisa Salters has the regular gig for ESPN, and John Sutcliffe gets it on ESPN Deportes. Right now, there are no plans to shake that up or squeeze the new social media star into the on-camera mix.

But given the public’s new obsession with Dipp, coupled with ESPN’s need for some good PR these days, we expect the “Worldwide Leader in Sports” to grant the 29-year-old viral video phenomenon some airtime back on the big stage — the flagship Monday Night Party.

Also Read: A Cord Cutters Guide to the 2017 Football Season

Or maybe Fox Sports will just hire him away. That could happen too.

By the way, if you missed Dipp’s cringe-worthy “performance” last night during the late game, well, you simply have to catch up to the rest of the internet here.