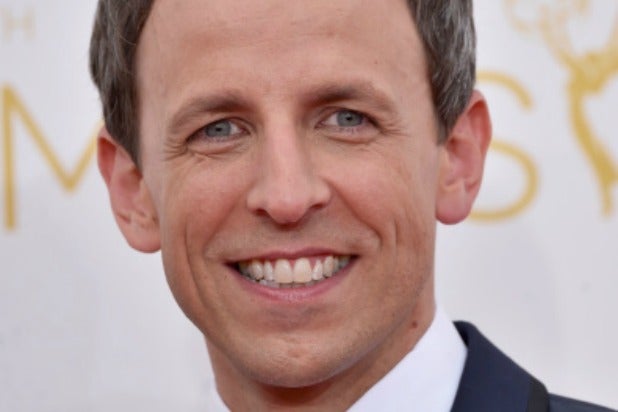 The Emmys took an if-it-ain’t broke approach Monday, handing out awards to a slew of past winners and passing up many chances to recognize new nominees with a win.

Even Matthew McConaughey, who won an Oscar this year, couldn’t break into a very clubby winners’ circle. Bryan Cranston beat the “True Detective” star to win his fourth Emmy for Outstanding Lead Actor in a Drama Series. It was one of many awards “Breaking Bad” scored in its victory-lap year.

It was such a night for past winners that even when the Emmys broke Claire Danes‘ streak for Outstanding Lead Actress in a Drama Series, the award went to a previous recipient: Julianna Margulies, for “The Good Wife.”

Maybe it’s because they’re on a Monday, in August, more than a month earlier than usual. But the 66th Primetime Emmy Awards had a laid-back, nothing-to-prove feel from the beginning, thanks partly to the chummy delivery of host Seth Meyers.

Once the awards started, the show only looked more sure of itself — and its past choices.

Meyers joked about distracted agents, how well HBO has done for itself since the days when its hottest show was “Fraggle Rock,” and how silly it is that broadcast TV airs an award show that gives its biggest prizes to cable and online shows. It felt insidery because it was.

The first presenter was Amy Poehler, his old partner on the Weekend Update segment of “Saturday Night Live.” The first nominee we saw on screen was Fred Armisen, another “SNL” alum, who sat just in front of two current “SNL” castmates, Cecily Strong and Aidy Bryant.

The show kept the non-surprises coming. The Emmys gave Jim Parsons his fourth Outstanding Lead Actor in a Comedy Series for “The Big Bang Theory.” Parsons had to endure a few jokes about how well he and his fellow actors are paid, thanks to their recent contract renegotiation. But millions of dollars and four Emmys make that kind of thing a little easier to take.

Moments later, Julia Louis-Dreyfus won her third consecutive Outstanding Lead Actress in a Comedy Series Emmy. It started to feel like the Emmys were taking an if-it-ain’t-broke approach to the whole night. (One very funny surprise: Louis-Dreyfus shared a mock-passionate kiss with Cranston after pretending not to remember his guest spot on “Seinfeld.”)

“The Amazing Race” won its 10th Emmy for Outstanding Reality Competition Program. When a producer said he didn’t expect the win at all, he was the only one. As Jessica Lange won for Outstanding Lead Actress in a Mini-Series or a Motion Picture Made for Television for “American Horror Story,” it felt like winning before might have been a prerequisite to winning this year. (Her previous win for the show was in the supporting actress category.)

One big upset: Sarah Silverman managed to beat Tina Fey, Poehler and Meyers (among others) for Outstanding Writing for a Variety Special. Her special “We Are Miracles” overcame their work on the Golden Globes.

The Emmys may be a little less eager to wow us this year because they’ve already recognized most of the best shows on television, or have plenty of time to get to them. During last year’s show, there was tension around whether “Breaking Bad” would finally get a much-deserved win for Outstanding Drama Series. It did.

So the big question Monday was whether “Game of Thrones” would finally get its due in the drama category — or if “True Detective” might break through. They didn’t, but that’s okay: HBO is bringing them both back. And “Breaking Bad” isn’t eligible next year.