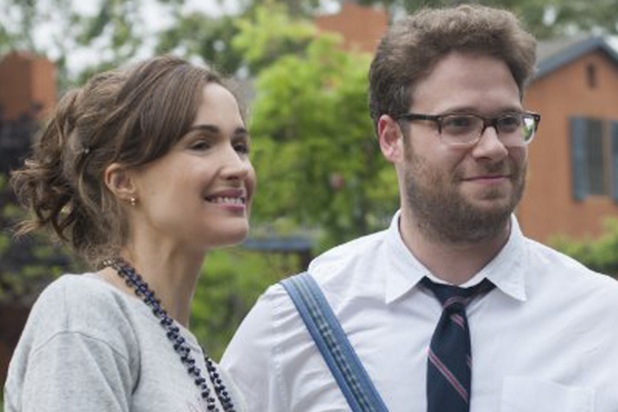 Seth Rogen admitted that he had missed Celine Dion at Caesar’s Palace, but said that he was certain that “Neighbors,” the new comedy that he screened at The Colosseum on Tuesday has the  singer trumped in one important regard.

As for the film, a story of a young married couple who have their lives upended after a fraternity moves in next door, fits squarely in his overgrown boy sweet-spot. Universal Studios is confident that the film will be a raunchy comedy hit, opting to screen it in its entirety for exhibitors at CinemaCon two months before it hits theaters.

The crowd of theater owners seemed to appreciate the R-rated antics, roaring loudly at envelope-pushing scenes that find a baby putting a condom in its mouth by accident, a hungover Rose Byrne being milked by Rogen and a panoply of pot jokes.

Byrne is the movie’s standout, proving that “Bridesmaids” was no fluke and creating a character that is more than just one of the interchangeable pretty faces usually called on to adorn these gross-out flicks. It’s also the rare comedy that offers up more male nudity than female — both Rogen’s hairy back and co-star Zac Efron‘s sculpted torso deserve their own billing.