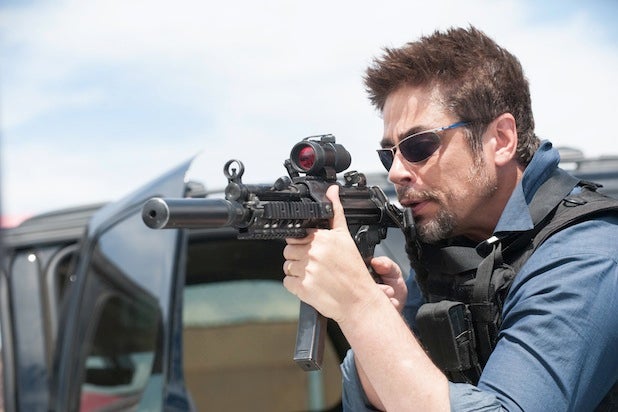 Ever since Joe Mantell uttered the immortal words, “Forget it, Jake. It’s Chinatown” to Jack Nicholson at the end of that Roman Polanski movie in 1972, that line has been a touchstone for summing up how some situations are just too corrupt, too screwed up to comprehend, much less remedy.

A variation on the line popped up in Pete Docter’s great animated film “Inside Out” at the Cannes Film Festival this weekend, and now Canadian director Denis Villeneuve has made a feature-length exploration of the drug trade, in which the entire movie pretty much says to Emily Blunt‘s character, “Forget it, Kate. It’s Juarez.”

“Sicario” has its premiere on Tuesday night, but it also provided a fearsome wake-up call at the Grand Theatre Lumiere at an early-morning press screening that day. With a worldview as dark as night and a moodiness  brilliantly captured by the great cinematographer Roger Deakins, Villeneuve’s film is state-of-art blackness, though it’s also brutal enough to have caused walkouts.

(Warning: The innocent are not spared in this film. In fact, Villeneuve and screenwriter Taylor Sheridan go out of their way to talk about, and show, how they’re not spared.)

Blunt plays an FBI agent recruited by a mysterious Josh Brolin (who’s aided by an even more mysterious Benicio del Toro) into a task force designed to battle the Mexican drug cartels. She goes in unsure of exactly what their agenda really is, and the more she learns the more unsavory it all becomes.

It’s a violent, bleak exploration of a bottomless moral quagmire, and Villeneuve is certainly a skilled enough filmmaker to pull it off. Though the Montreal-based director first became known for French-language films like the Oscar-nominated “Incendies,” his breakthrough for an American audience was the taut 2013 thriller “Prisoners,” with Jake Gyllenhaal and Hugh Jackman.

But where “Prisoners” was a gripping psychological study in addition to its murder-mystery thrills, “Sicario” is less satisfying despite its many highlights. Blunt’s character may continue the trend of Cannes films with female leads, but by the end she’s become a less interesting character than Del Toro’s Alejandro, who gains dimension as Blunt remains stuck.

Still, you’d be hard-pressed to find a more brutally accomplished thriller at the festival this year. To borrow a word from a previous Villeneuve film, “Sicario” takes no prisoners.