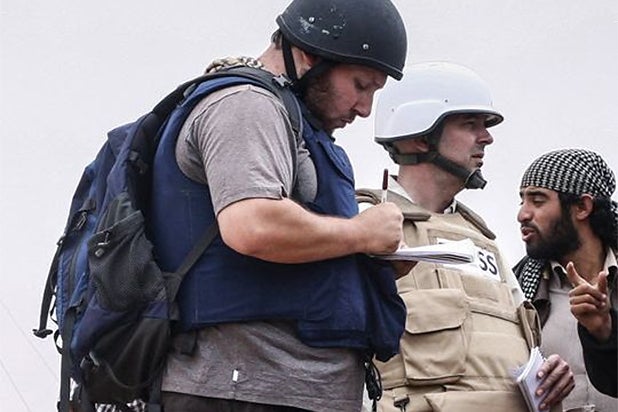 Steven Sotloff’s family wants the world to remember the slain journalist as a “mere man who wanted to give a voice to those who had none,” who was repeatedly drawn back to the ongoing crisis in the Middle East.

On Tuesday, Sotloff became the second American journalist to be beheaded on camera by the terrorist group called the Islamic State (ISIS), following photojournalist James Foley’s murder two weeks prior.

“He was no war junkie,” said spokesperson Barak Barfi, reading from a Sotloff family statement on Wednesday. “He did not want to be a modern day Lawrence of Arabia. He merely wanted to give voice to those who had none.”

Sotloff’s interactions with and stories about ordinary citizens who must endure extraordinary circumstances in dangerous war zones are cited as his legacy. “Their stories were Steve’s stories,” said Barfi. “He ultimately sacrificed his life to bring their stories to the world.”

The escalated violence against hostages held by the terrorist organization has prompted renewed debate within the U.S. government on how to continue to deal with the threat, with President Barack Obama promising to bring the killers to justice.

“Those who make the mistake of harming Americans will learn that we will not forget, and that our reach is long and that justice will be served,” Obama said during a press conference from Estonia on Wednesday.

In the videos, the militants have blamed the slain journalists’ deaths on the U.S.’s Middle East policies, and its continued airstrikes against ISIS targets in Iraq.

Sotloff, who had dual U.S.-Israel citizenship, covered the Middle East for outlets like TIME Magazine, Christian Science Monitor and Foreign Policy. He was fluent in Arabic, and his career took off with his freelance coverage of the Arab Spring uprising in 2011.

According to Sotloff’s colleague and friend Janine Di Giovanni, Sotloff revealed right before his disappearance that he felt like he may have been on a hit list of targets for ISIS.

“One thing he had told me, that was again rather chilling, is that he was concerned that he had been on some kind of a list, and this had been around the time that ISIS had been showing up and taking over checkpoints that had been manned before by the rebels,” Di Giovanni, Newsweek’s Middle East editor, told CNN on Tuesday. “And he thought he had angered some of the rebels, he didn’t know which ones, by taking footage of a hospital in Aleppo that had been bombed, and he had been very concerned about this. But he still went back.”

Sotloff also appeared ready to retire from this dangerous line of work. He had a beer with a Daily Beast reporter right before his last trip across the Turkish border into Syria, and relayed that he was “sick of being beaten up, and shot at, and accused of being a spy.” He even had tentative plans to attend graduate school back in the States. But, citing a good story he was keeping under wraps, he ventured into Syria for one last time.

Though the Sotloff family were aware of his kidnapping and enacted a virtual news blackout for his safety last year, it does not appear they had been in touch with the journalist or his kidnappers prior to the release of the Foley video. Sotloff’s father indicated he only found out about the status of his son by watching the video. “At last, I know my son is alive,” he said, according to Sotloff’s friend Emerson Lotzia, reported the Miami Herald.

“Steve had a gentle soul that this world will be without,” concluded the Sotloffs in their statement. “But his spirit will endure in our hearts. Today, we grieve. This week, we mourn. But we will emerge from this ordeal. Our village is strong. We will not allow our enemies to hold us hostage with the sole weapon they possess: fear.”