Pollono, Bernthal and Whigham keep things light, believable, and charming enough, even after the abrupt and seemingly random arrival of preppy drug dealer Chad (Spencer House, “Space Force”) threatens to ruin the movie’s otherwise aimless fun. Chad pushes “Small Engine Repair” into unexpectedly dark territory, the kind that invites comparisons with real-life sexual predators like Brett Kavanaugh and other prominent politicians. Pollono’s affable drama doesn’t say much about its characters’ boozy locker talk, but it does hold together well enough thanks to its strong performances and sympathetic characters. 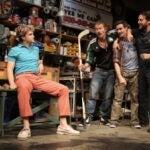 “Small Engine Repair” begins and ends as a story about three middle-aged bros and one teenage girl. Pollono’s drama doesn’t really focus on or consider sassy college-bound daughter Crystal (Ciara Bravo, “Cherry”) beyond a handful of peripheral scenes. But Crystal does speak for Pollono’s general concern with how young women are messed up by guys like Chad, who is also implicitly contrasted with Crystal’s sad-sack dad Frankie (Pollono), his hothead buddy Terrance (Bernthal) and their squirrelly chum Packie (Whigham).

Crystal’s also thankfully not the movie’s only semi-complex female character: John’s catty ex-girlfriend Karen (Jordana Spiro, “Fear Street”) also busts his balls. Crystal nails her father and his buddies a couple of times, though she also inadvertently paints the movie into a corner after she snarks that her family clings “to the last branch of the lower-middle class” and also calls Terrance “that guy who makes one too many gay jokes.” Then again, Terrance also admits that he prefers dating younger women (ie: 26 years old and younger) in a later scene, so that’s a sort of progress.

Thankfully, Frankie and his buddies also have a few choice words for each other, sometimes about their personal failings, but mostly about women and their messed-up childhoods. They talk about using Instagram to get laid, and reminisce about “the first real bush I ever saw”, as Frankie puts it, because “how can you not bring that up?” They also joke about adult dating snafus: Frankie remembers trying to bed a single mom who, instead of mounting him, falls asleep holding her pre-teen son in his racecar bed. That’s “the way it should be” says Frankie (sincerely, too). Then he goes back to grilling steaks for his dinner. 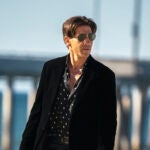 There’s some painful and bittersweet guy talk scattered throughout, which inevitably leads the movie to the subject of daddy issues. Pollono and his co-stars make the most of his quippy, fine-tuned banter, like when Terrance asks Chad: “What’s it like, havin’ a father you’re not ashamed of?” after hearing Chad boast about his dad, the powerful attorney. “Good, I guess” Chad says, which might be the funniest exchange in “Small Engine Repair.”

Or maybe that’s when Packie pumps up a boyhood story involving the White Sox with an especially indulgent preface: “The Sox came to New England with something they hadn’t had in a long time: Hope.” To which Terrance sneers: “What is this, a fuckin’ Ken Burns documentary?” These are the jokes, and they’re mostly good enough.

“Small Engine Repair” eventually stalls once Pollono juxtaposes Frankie and his dead-end with Chad, who visits Frankie’s garage to sell him ecstasy. Pollono presents a thorny dilemma — What if this snotty Millennial did something terrible to one of your loved ones, but he didn’t know that you knew about it? — then hastily side-steps its darker implications with a too-neat resolution. 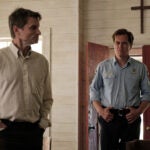 There are also a few brief moments where the movie almost becomes a by-the-numbers revenge drama, complete with tacky dialogue, like when Bernthal growls at Chad that “there’s two options of how we move forward.” Thankfully, neither option gets much more consideration than Packie’s Ken Burns story.

Pollono’s generous consideration — for his castmates’ performances, and their characters’ actions — holds “Small Engine Repair” together, even during its soft (ie: weak, but not fatal) finale. You can tell that he’s not only thought about why he wants to tell this story but also how he can make us empathize with his characters without indulging their worst behavior.

Pollono’s clearly got big love for all three of his main guys, and capably plays to both Bernthal and Whigham’s strengths as performers. Whigham almost walks away with the movie when Chad jokes about the size of one of his would-be conquest’s nipples, and Packie matter-of-factly replies: “I’ve seen bigger.” There’s a lot more where that came from scattered throughout “Small Engine Repair,” and it’s usually more compelling than the movie’s more ostentatiously dramatic moments.