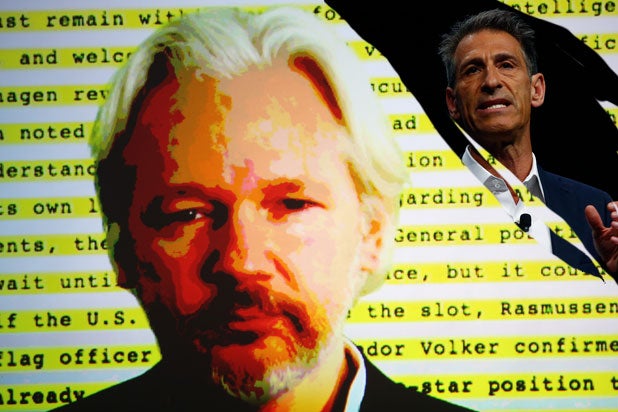 Sony Pictures once again faces a security compromise that could result in public embarrassment, as Julian Assange’s Wikileaks has published over 30,000 documents and 170,000 emails made available in the December breach of the studio.

“This archive shows the inner workings of an influential multinational corporation. It is newsworthy and at the centre of a geo-political conflict. It belongs in the public domain. WikiLeaks will ensure it stays there,” Assange said in a press release.

Sony issued a statement blasting Assange’s position: “We vehemently disagree with WikiLeaks’ assertion that this material belongs in the public domain,” a spokesperson said.

The data — which Wikileaks totals at 30,287 documents and 173,132 emails shared among 2,200 SPE email users — was sourced from existing files made available in late 2014 on file sharing sites, a hack that the U.S. government has attributed to North Korea allegedly in response to Sony’s Kim Jong-un-skewering “The Interview.”

The breach was easily one of the most egregious cyber-attacks on an American corporation in history. The act resulted in scandal like a revealed trashing of A-list actress and director Angelina Jolie and an exchange between then-CEO Amy Pascal and producer Scott Rudin that mocked President Obama’s taste in movies as exclusively African American-themed.

The cyber-attack on Sony Pictures was a malicious criminal act, and we strongly condemn the indexing of stolen employee and other private and privileged information on WikiLeaks. The attackers used the dissemination of stolen information to try to harm SPE and its employees, and now WikiLeaks regrettably is assisting them in that effort. We vehemently disagree with WikiLeaks’ assertion that this material belongs in the public domain and will continue to fight for the safety, security, and privacy of our company and its more than 6,000 employees.