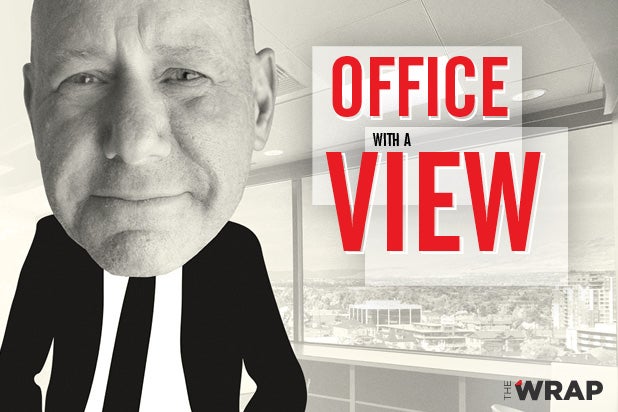 Steve Golin is having a hell of a year.

The longtime producer and Anonymous Content co-founder has two films up for the Best Picture Oscar this year: “Spotlight” and “The Revenant,” both well-respected for artistry and emotional resonance with audiences. And the company also produced the Golden Globe winner for Best TV Drama, “Mr. Robot.”

The 60-year-old producer seems to occupy a space of enviable consistency and buzzy momentum — so TheWrap recruited him for Office With a View to discuss Leonardo DiCaprio‘s chances to finally take home an Academy Award, the fate of Anonymous’ brilliant but troubled “True Detective,” budgets, police violence, gender disparity, diversity in the Academy and much more.

On the Academy’s push for diversity in wake of #OscarsSoWhite:

“It’s a very tricky issue because the voters are the voters. Personally, I loved ‘Straight Outta Compton’ and I really was very disappointed that it wasn’t included in the Best Picture list of movies. Frankly, it was one of the best movies of the year and it had my vote.

“I don’t think that there’s a big conspiracy out there to decide how to vote. They just vote. Part of it is a function of the fact that there are not enough movies with diversity, and not enough filmmakers with diversity. It just so happens ‘The Revenant’ was made by the gentleman of color, so we did our little part, but it was very disappointing not to see ‘Creed’ and ‘Compton’ and other movies not get more recognition.

On the box office success of “The Revenant” — and its big budget:

“‘The Revenant’ was in development with my partner Keith Redmon and David Kanter since around 2004. It’s been a long time, and there were a couple of false starts. I’m glad we can start talking about how big the box office is and not how big the budget is.

“It was getting tiring. People hadn’t seen the movie. It’s hard to understand how difficult the movie was until you actually see it. New Regency was very supportive throughout the entire process, and the budget definitely escalated more from where we started but I think everyone is vindicated now.”

“Here’s the thing — Leo didn’t make the movie to get a pat on the back. He made the movie for a variety of reasons, mostly that he wanted to. I hope it is his year. I think he’s so gifted, and was such a great collaborator with Alejandro (Inarritu). But the whole award thing is not why we make movies. It’s really a bonus — if you set out to make a movie because you want to win an award, you’re 99 percent of the time going to be disappointed. Leo is very pleased with the reaction he’s getting, the nomination, the Globe… but I can assure you that’s not why he made the movie.”

“One thing we’re proud of over here is that we have made a lot of movies with women directors and we’re going to do more. We manage Lesli Linka Glatter — she’s one of the top TV directors in the business, and why she’s not had an opportunity to make a movie lately is beyond me. That’s something that is definitely part of our 2016 agenda, to find her a movie.”

Why “Spotlight” was a tightrope walk for Tom McCarthy:

“The screenplay that Josh [Singer] and Tom wrote is very beautiful and delicate. From the script, Tom did a phenomenal job walking the tightrope on this movie. There are a lot of elements to this — one, it’s a love letter to investigative journalism so I think the press, be it critics or journalists, they love that. So do we. But this movie ticks a lot of boxes: it’s about the death of investigative journalism, the quagmire that newspapers are in today, but it’s also about society and the way that it dealt with this situation [the exposing of Roman Catholic pedophile priests in Boston]. How did so many people turn a blind eye to a situation sitting in plain sight?

“The reaction, both from the Catholic Church — who has come back and said they think it’s an important movie for people to see — but also for the survivors of this sexual abuse perpetrated by the Church, but also all people that have been exposed to sexual abuse in their lives. Look at the Bill Cosby thing or the [Jerry] Sandusky thing.”

On his knack for discovering talents like Spike Jonze and David Lynch:

“We’re in business with a lot of directors — we have a huge roster here. I do come from a director background, from film school, TV commercials, music videos. Once you find the material, the director is the most important hire. The hardest part of this business is finding great material so the writers are obviously key but then the trick is, ‘Who is the filmmaker?’ A good filmmaker will attract really good actors and then the money takes care of itself. If you can put together a package with a good piece of material, a director, the actors — financing is the easiest part.”

On the upcoming violent cop thriller “Triple 9,” in a real-world culture full of police tension:

“In all honesty, that movie was in development for five years — and it’s a movie. It’s not a true story. It’s about cops killing cops, which is ironic. It’s a popcorn movie, it’s a lot of fun. We’ve got a great cast and [director] John Hillcoat, who is someone we really believe in. Sometimes you make a movie that you’ve been developing for a long time and it becomes topical in a good way or bad way. But this movie is still a lot of fun.”

“Those guys [Spacey and Brunetti] are clearly super creative and talented. I think it’s a challenge. It’s really smart for Ryan [Kavanaugh] to do a partnership with them. They’re going to lend some credibility and maybe wipe some of the tarnish from all the things that happened there because they have great talent relationships.”

“We’re working on that now. Nic [Pizzolatto] is thinking about some ideas. But we’re really excited about that. We’re doing a lot of TV, it’s something we’re very active in. We’re headed to ‘Mr. Robot‘ season two, among other things. We’re really, really proud of that show.”