Warning: This post contains spoilers for the ending of “Squid Game.”

Shortly after it debuted on Netflix in mid-September, “Squid Game” took the world by storm. The South Korean survival drama series connected in a way no other Netflix show has before, and it’s now officially the streaming service’s biggest hit of all time. But while each episode had viewers on the edge of their seats, the “Squid Game” ending left the story on a curious note – a cliffhanger as surprising as it was inevitable.

If you’re confused about what happens at the end of Episode 9, or what potentially happens next, or whether Seong Gi-hun made the right decision, let’s get into it – complete with the creator of the show’s interpretation of that final moment.

The final episode of “Squid Game” finds Seong Gi-hun (Lee Jung-jae) and Cho Sang-woo (Park Hae-soo) as the two remaining contestants of the deadly competition, with Sang-woo having murdered Kang Sae-byeok (Jung Ho-yeon) in an effort to get closer to the prize money.

The final game is, of course, Squid Game, and after a coin toss, Gi-hun takes the offensive position. The rules are explained that the winner is determined either by Gi-hun making it to the top of the squid drawn on the ground, or by one of the players killing the other. Gi-hun is enraged by Sang-woo’s cruel act of violence, and the two have a brutal fight that ends with Sang-woo on the ground and Gi-hun holding a knife. But Gi-hun refuses to kill Sang-woo, and also refuses to win the game, which would trigger Sang-woo’s death. He wants them both to walk away with their lives and without the prize money. But Sang-woo, now filled with regret, plunges the knife into his own throat, thus ending the game and determining Gi-hun the winner.

As promised, Gi-hun is allowed to leave with his life and with the prize money, but when he returns home, he’s almost in a daze. He gets to his house and discovers that in his absence, his mother has died. The story then flashes forward a full year later, with Gi-hun looking destitute. He hasn’t touched the prize money at all.

Then Gi-hun gets a mysterious note that leads him to an office building in the middle of the night, where he discovers that not only is Oh Il-nam (O Yeong-su) alive, but he’s the one responsible for creating the deadly games in the first place. Il-nam says he was being truthful about the tumor in his brain, and he decided to play the games himself one time before he died, having spent the rest of his life as an audience member.

Il-nam reveals that he’s a money lender, and he invented the games as a way to have fun. “Do you know what someone with no money has in common with someone with too much money?” Il-nam asks Gi-hun. “Living is no fun for them. If you have too much money, no matter what you buy, eat or drink, everything gets boring in the end. At some point, all my clients began to tell me the same thing: that they had no joy in life anymore. So we all got together and did some pondering. What can we do to have some fun?” 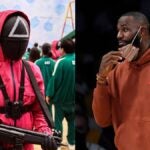 Gi-hun is visibly upset, wondering how Il-nam could be so callous. He asks Il-nam why he let him live, and Il-nam replies, “Because it was fun playing with you. Thanks to you, I got to remember things from the past I had long forgotten. It’d been so long since I had that much fun.”

After getting some closure, Gi-hun gets a haircut and prepares to go visit his daughter in the United States. But on his way, he witnesses the same man in the suit playing ddakji with another debt-ridden stranger. Gi-hun is horrified – this means that despite the fact that Il-nam is dead, the game is getting ready to begin again. Gi-hun steals the business card from the bystander and tells him not to call the number.

Just as Gi-hun is about to board the plane to the U.S., he calls the number. “Listen carefully,” he says. “I’m not a horse. I’m a person. That’s why I want to know who you people are and how you can commit such atrocities against people.” The voice on the other end of the phone tells him his ideas are “absurd” and that he should get on the plane for his own good. Gi-hun hangs up, turns around, and walks toward the camera. He’s not getting on the plane. But where is he going?

Why Gi-hun Doesn’t Get On the Plane

Many are flummoxed by Gi-hun’s decision here (including LeBron James). Why doesn’t he keep the prize money and live his life? And is he going to seek revenge now? What’s his endgame?

Creator Hwang Dong-hyuk told THR that he views the ending as thematically appropriate and, actually, not a cliffhanger at all. “It’s true that Season 1 ended in an open-ended way,” Hwang said. “But I actually thought that this could be good closure for the whole story, too. Season 1 ends with Gi-hun turning back and not getting on the plane to the States. And that was, in fact, my way of communicating the message that you should not be dragged along by the competitive flow of society, but that you should start thinking about who has created the system – and whether there is some potential for you to turn back and face it.”

Hwang continued, noting that in his view, the ending doesn’t set up a revenge story. “So it’s not necessarily Gi-hun turning back to get revenge. It could actually be interpreted as him making a very on-the-spot eye contact with what is truly going on in the bigger picture. So I thought that might be a good, simple-but-ambiguous way to end the story for Gi-hun.”

Will There Be a Squid Game Season 2?

But just because Hwang views the ending of Season 1 as a conclusion for Gi-hun’s story doesn’t mean there’s no potential to continue. While Netflix hasn’t officially ordered a second season of “Squid Game” yet, Hwang admitted in the same interview that there are many possibilities for storylines for a Season 2 – including ones involving Gi-hun. “We could go with Gi-hun’s story as he turns back, and explore more about how he’s going to navigate through his recokining with the people who are designing the games,” Hwang said. The creator also noted a second season could explore the storyline of the Front Man and his brother, the police officer, or even explore the story of the recruiter who signed Gi-hun up in the first place.

So while there’s no guarantee that a “Squid Game” Season 2 will happen, and while the creator of the show contends Season 1 ends in a conclusive fashion, there’s a lot of potential. Never say never.