Want to know who is the most difficult star on the set of “Star Trek: Discovery”? (Hint: This performer’s biggest line of dialogue over the last four seasons was “Meow”).

Or why David Ajala doesn’t want to hear in advance from the writers what they have in store for his character from episode to episode? (“As an actor, you have to keep a certain level of suppleness…”)

Or how Sonequa Martin-Green really feels about the “Star Trek” franchise’s famously obsessive-compulsive fans? (“They’re such a beautiful group of people”).

Then take a look at TheWrap’s “Star Trek: Discovery” Q&A panel, in which contributing editor Benjamin Svetkey talked to both actors as well as co-showrunner and executive producer Michelle Paradise and introduced an extended trailer of the Paramount+ series upcoming fifth season. 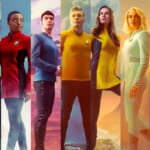 Other revelations from the interview: how the cast and crew keep track of all the various timelines criss-crossing through the “Star Trek” canon; the challenges of making a totally new sort of series and still staying true to the franchise’s original DNA; and why not everyone was onboard with Discovery’s mission to boldly become the most inclusive sci-fi show on TV, featuring Trek-dom’s first gay couple and first nonbinary character.

“If someone has a problem with that,” said Paradise, “then this isn’t the show for them.”

Oh, and one more tidbit from the Q&A: Star Trek actually employs not one but two PhDs to make sure there’s as much “science-y stuff” in the plots — as Paradise put it — as there is fiction. “We know that people pay attention,” she said. 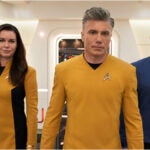