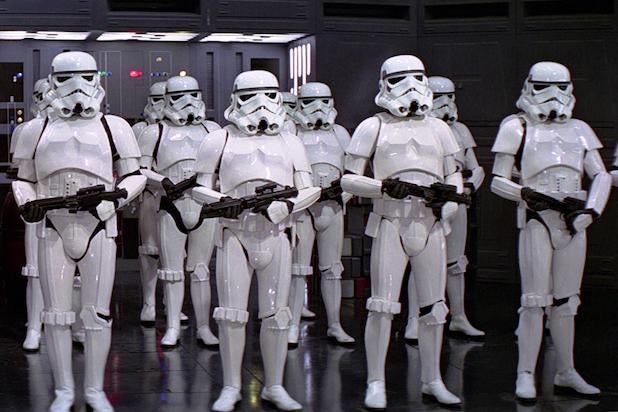 A man paying tribute to “Star Wars” terrified a Kansas business owner this week while wearing a full Storm Trooper outfit and the weapon that goes with it.

KSAL News reports that the business owner called 911 because they feared he was carrying an AK-47 through the streets of Salina, KS.

Police advised the business  to enter lockdown mode, while numerous officers were dispatched to deal with the possible threat, which turned out to be plastic.

Christopher Burns (pictured in action below), who wears the iconic outfit to make Vine videos under  the alias of Stormtrooper Sam, was a little surprised that people were alarmed by his presence.

“‘Star Wars’ is such an iconic image, I was a little bit surprised that someone would see a Stormtrooper and fear when you know it’s been around since the 70’s,” Burns said.

Officers counseled Burns and the man capturing the stunt on camera about the possible consequences of carrying a gun in public, and urged them to be responsible before letting them go.

See video: Elliot Rodger’s Parents ‘Mourning the Victims More Than They Are Mourning Their Son’

The open carry of a firearm is legal in Kansas, but police Capt. Mike Sweeney emphasized “you’re going to draw our attention to find out what you are doing.”

It’s not hard to imagine why the business owner who called the police was on edge when he saw the masked man carrying what he thought was a real weapon.

The false alarm follows dozens of mass shootings nationwide in 2014, alone. The most well-publicized of late was Elliot Rodger’s rampage through Santa Barbara, CA, where he killed six people and injured 13 others before shooting himself in the head.