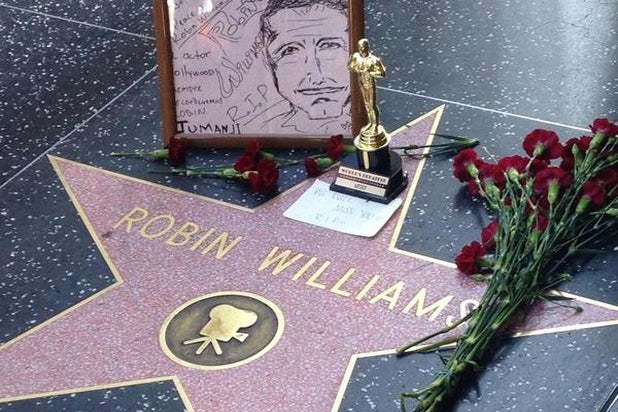 After the shocking and untimely death of Robin Williams on Monday, the outpouring of grief and support from the celebrity community was immediate. From those who worked with him to those who called him friend, and those who were simply fans of his work, his loss was immediately felt.

According to the Marin County coroner, Williams’ death was suspected to be a suicide “due to asphyxia.” He was 63-years old.

Williams came up through the world of stand-up comedy, before getting his big break on the “Mork & Mindy” television show. Many of his celebrity relationships stem back to his early days.

Jay Leno, who came up in the stand-up comedy circuit at the same time, said in a statement, “I saw him on stage the very first time he auditioned at the improv in Los Angeles, and we have been friends ever since. It’s a very sad day.”

Danny DeVito directed his friend in the 2002 Warner Bros. film “Death to Smoochy.” He said in a statement, “Sad to think about this. Hard to speak. Hard to say. Hard to take. All I can think about is what a joy he was to be with. I’m devastated. I’m sending my love to his family and everyone who loved him. My heart is broken by this news.”

Ed Norton, who also worked with Williams in “Death to Smoochy,” said in a statement: “I grew up watching Robin and was always in awe of the range of his talents. To find that he was as great spirited and generous a person as I’ve ever worked with only made me admire him more. The film we made together was one of the most pure fun experiences I’ve ever had.”

Steven Spielberg, who was a longtime friend and worked with Williams on the 1991 film “Hook,” said, “Robin was a lightning storm of comic genius and our laughter was the thunder that sustained him.” Williams’ 1996 “Jack” co-star Bill Cosby said in a statement, “I am so stunned.”

Chris Columbus directed Williams in both “” and “Bicentennial Man” in the 1990s. He called Williams an “inspired and gifted” comic, as well as “one of this generation’s actors.” The director went on to add, “To watch Robin work, was a magical and special privilege. His performances were unlike anything any of us had ever seen, they came from some spiritual and otherworldly place. He truly was one of the few people who deserved the title of ‘genius.’ … The world was a better place with Robin in it. And his beautiful legacy will live on forever.”

Mercedes Ruehl, who starred with Williams in one of his more dramatic roles, 1991’s “The Fisher King,” said in a statement, “Robin was a man graced and challenged by a complex and mighty soul. May he rest in peace.”

Marcia Gay Harden starred opposite Williams in “Flubber,” the 1997 remake of the mad-scientist classic. “I have never laughed so hard as with Robin. He kept cast and crew in such good spirits,” she said in a statement. “I am shocked at his death, and his tremendous battle with depression. He will be remembered for the joy he brought to carefully, thoughtfully wrought characters, and the spark of human hope he so believed in.”

Comedian David Steinberg said, “Robin Williams and I went on stage together for six months last year playing theaters across the country. Besides seeing his brilliant improvisational mind in action every night was the pleasure in just getting to know him and his generosity and spirit. He looked after Jonathan Winters and put him on his TV shows. He would drive to Santa Barbara weekly to make sure Jonathan was OK. A comic genius looking after another comic genius. Robin looked after everyone. If only he would have looked after himself.”

Ben Stiller, who worked with Robin Williams on the “Night at the Museum” movies, said: “I met Robin when I was 13 at The Improv. I was there with my parents who were performing and it was crowded and I heard this voice behind me saying ‘Stay close to your mother you’ll be safe! Stay close to your mother you’ll be safe!’ I turned around and it was Robin. For a 13-year old who was a huge ‘Mork & Mindy’ fan it was sort of like the end of the world. I never forgot it. So working with him years later, I always had this little voice insides of me going, ‘You are acting with Robin Williams! This is the coolest thing ever!’ I never got over being a fan. I think most people my age have the same feeling — that he and Steve Martin and Bill Murray sort of represented what it meant to be funny.

“His kindness and generosity is what I think of. How kind he was to anyone who wanted to connect with him. And he could not help but be funny all the time. He would do something as long as it would keep you laughing. He made many, many film crews laugh out loud before the audiences ever saw it. He made such a big impact on the world. So there is the man, and his talent, and I think in his case both were extraordinary”

Terry Gilliam, who directed Williams in “The Fisher King” (1991), said: “Robin Williams, the most astonishingly funny, brilliant, profound and silly miracle of mind and spirit, has left the planet. He was a giant heart, a fireball friend, a wondrous gift from the gods. Now the selfish bastards have taken him back. Fuck ‘em!”

Actor Nathan Lane, who starred alongside Williams in “The Birdcage” had a heartfelt statement, too. “I feel I have to say something more than just ‘heartbreaking and shocking’ which everyone has said and I feel as well, but something a little more personal,” he said.  “One day in 1995 while riffing in the character of a snobby French toy store owner, Robin made me laugh so hard and so long that I cried. It seemed to please him no end. Yesterday I cried again at the thought that he was gone. What I will always remember about Robin, perhaps even more than his comic genius, extraordinary talent, and astounding intellect, was his huge heart – his tremendous kindness, generosity, and compassion as an acting partner, colleague, and fellow traveler in a difficult world. My heartfelt condolences to his wife and family.”