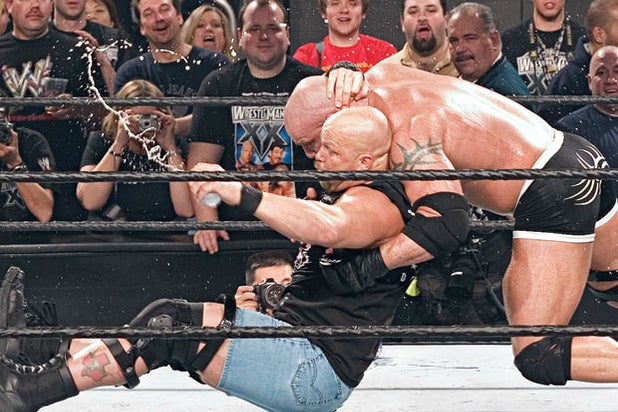 “Stone Cold” Steve Austin won’t be returning to WWE action for one last cash-grab, and that’s the bottom line, because he said so in an interview with TheWrap.

The one-time Stunning Steve’s reasoning for refusing to pull a Goldberg (that’s the other guy pictured above, ironically receiving a devastating Stone Cold Stunner from Austin back in both of their heydays) is pretty respectable advice for any athlete that goes out on top.

“It’s just really because I’ve been there and I did it on the very highest level,” the Attitude Era icon, podcaster, IPA brewer and CMT reality competition host told us. “When I had to ride off into the sunset — that was a tough pill for me to swallow. It took me a long time to come to grips with that.”

“After all these years, I’ve got the business out of my system from, you know, participating in it and being in the grind,” Austin continued. “I still absolutely love the business, but I’m away from it.”

He’s “satisfied” and “happy” with that decision to stay away from the ring, the man who rewrote one of the Bible’s most popular verses into a classic pro-wrestling promo, told us. Plus, Austin gets his fill of the topic from his twice-weekly “Stone Cold Podcast,” which often covers squared-circle matters and has even been featured in video form on WWE Network.

“I have very high expectations for myself, and if I couldn’t be the 100 percent ‘Stone Cold’ that I was, I’d rather not be,” the beer-guzzling smack-talker added.

Austin, whose real name is Steven James Anderson, is fine with you being “Stone Cold,” however. This reporter asked the “Broken Skull Challenge” ringleader (and former WWE Ringmaster) how an upstart grappler gets the go-ahead to use a legend’s finishing maneuver, like when Kevin Owens recently broke out the Stone Cold Stunner versus Roman Reigns — a request that Austin remembers coming via text message.

“There’s different ways to go about it,” Austin, who himself adopted the move from Mikey Whipwreck’s Whipper-Snapper explained. “Sometimes people will check with other guys.”

“I’m down with anybody using the Stunner,” the 52-year-old Victoria, Texas native says. “I would prefer that it be used as a used a finisher, and not as the current routine with the DDT, where it’s basically one of the lamest false-finishes in the business after being one of the most devastating finishers in the history of the business.”

That classic Jake “The Snake” Roberts bell-ringing finishing move — the much more user-friendly abbreviation for Dichlorodiphenyltrichloroethane — has basically been bastardized into its own submission, to the point where it’s now nothing more than mid-match offense. That’s the perfect example of a legendary move being “not properly respected,” says Austin.

So break out the Stunner, but do so at your own risk, Superstars. Don’t mess with the Texas Rattlesnake.

“Broken Skull Challenge” returns to CMT for Season 5 on Tuesday, Sept. 26 at 10/9c. Check back with TheWrap between now and then for more from our interview with Austin.