“The Afterparty” creator and director Chris Miller knows full-well his Apple TV+ comedy series spawned various Reddit threads each week – because he was reading them.

Each installment of the murder-mystery comedy told the story of one fateful night from a different character’s point of view, with the genre of the show changing depending on who was telling that week’s story. But Miller threaded plenty of Easter eggs and plot threads throughout the series that would build to the big reveal, and make a rewatch of the show that much more rewarding.

During a recent Q&A panel for TheWrap with co-stars Ben Schwartz and Zoë Chao, Miller said he wasn’t aware of the Reddit threads devoted to sleuthing out the killer until a few episodes in, but once they came to his attention he started lurking.

“It definitely grew in the first couple weeks that the show came on the air, and I wasn’t really tracking it that much until somebody hipped me to it a few weeks down the road,” Miller said during the panel. “The interesting thing is the show is great because you can watch it just casually, like a regular human being, or if you’re the type of person that likes to rewatch things and obsess over things you can watch and look for little details and freeze-frame and there’s all sorts of stuff hidden in there and it really meant that a wild community of people who were really passionate about the show were able to discuss even the tiniest, tiniest details. Some of which had clues in them and some of them they were just building clues out of nothing, which was fascinating.” 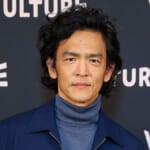 Miller even took to fanning the flames as the season progressed, and admitted during the panel to trying to throw viewers onto Zoë’s character as the potential killer.

“I started lurking because I wanted to see how many people were going to figure it out and what we needed to do to sort of throw chum in the water,” Miller said. “Which we did – we did have the Apple account leak a fake picture that we put of Zoë with a blonde wig on and then delete it 15 minutes later as though it was an accident.”

“That blew my mind when you told me that, and I barely remember putting that wig on,” Chao responded.

As for favorite fan theories that didn’t pan out, a specific one came to mind for Miller.

“One of my favorites was that Walt was Xavier in disguise,” Miller said with a laugh.

“My dad had a great one where he didn’t trust Zoë and [Brett’s] kid,” Schwartz added. “He’s like, ‘Somethin’s up with that kid. That kid is the killer.’ He was like, ‘Chris and Phil [Lord] they’re very smart, they’re gonna get you where you don’t see it coming.’ My own father thought it was Zoë and [Brett’s] kid for the entire time, until the last [episode].”

There were also fan theories about Walt being the killer because of his use of a non-iPhone in an Apple TV+ series, for which Miller revealed they had to get special permission. 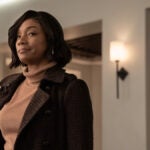 “We had to get special permission to use a non-iPhone, which we did use with Walt,” Miller said. “We had Walt use a generic phone as a way to, again, mislead the audience into thinking maybe Walt was the killer because he was the only one that didn’t use an iPhone. That theory that Rian Johnson had put out there, it was true that [Apple] didn’t like having villains use Apple products in shows and movies. We thought we should definitely use this to our advantage.”

Production is currently underway on “The Afterparty” Season 2 with Chao and Sam Richardson returning as Zoë and Aniq and Tiffany Haddish reprising her role as Detective Danner, and Miller dropped one piece of new news about the second season.

“We know the cast, we know the setting – it’s at a wedding. Here’s a piece of news: A lot of people have been speculating that it’s Aniq and Zoë’s wedding, but it is not Aniq and Zoë’s wedding,” Miller revealed. “I’m really excited about this year’s mystery and all the crazy film styles that we’re shooting in, and I think it’s building on what we did the first season and going into some crazy new places.

Watch the video above and the full panel here.