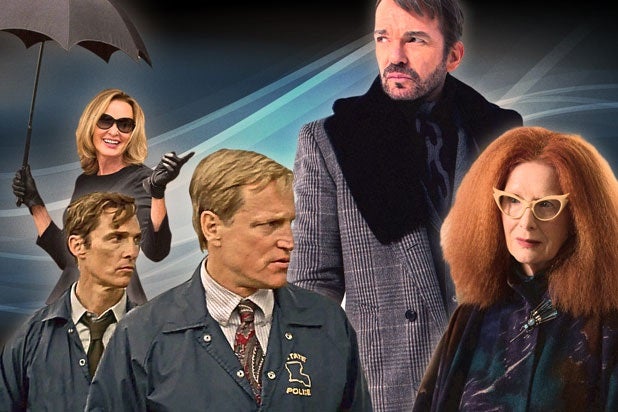 The 2011 premiere of FX’s “American Horror Story” marked an odd turn in television programming — and not just because the series involved a guy in a rubber bondage suit and a half-ghost baby.

The Ryan Murphy/Brad Falchuk drama was notable for popularizing a new format. An anthology series that would present all new characters and a new story each season, “American Horror Story” flew in the face of conventional wisdom. Instead of creating characters that, hopefully, viewers would become attached to and tune in from season to season to see how they develop, the series wipes the slate clean and starts fresh every season, hoping that viewers will embrace the change.

Despite being a creative roll of the dice, “American Horror Story” has flourished for three seasons — and paved the way for others. Earlier this year FX launched “Fargo,” an adaptation of the 1996 Coen Brothers film that employs the same model and amassed critical acclaim, racking up 18 Emmy nominations and three wins. HBO’s “True Detective” launched in January and became one of the year’s most buzzed-about series. It also received plenty of Emmy love, scoring 12 nominations and five wins. (“American Horror Story,” which premieres its fourth iteration — subtitled “Freak Show” — on Oct. 8, is also no slouch in the Emmys department; Season 3 of the series, “Coven,” raked in 17 nominations with four wins.)

And there are more anthology offerings to come. Starz is developing a small-screen anthology version of the Steven Soderbergh film “The Girlfriend Experience,” with Soderbergh executive producing. The network also hopes to give its series “The White Queen” and its upcoming drama “The Missing” the anthology treatment.

A solid track record, so far — though Nick Grad, president of original programming, FX Networks and FX Productions, admits that there was trepidation when the model for “American Horror Story” was first presented by Murphy.

“I think any time someone wants to do something different, it strikes a little bit of fear,” Grad told TheWrap. “But I think every great success has taken some bold stance and broken some kind of ‘rule’ in the rule book. … I think if you let the creative dictate the way, I think the people will respond.”

While the prospect of essentially creating a new series every season is daunting, it does have its advantages. There’s casting, for instance. “Fargo” boasted a cast that included Billy Bob Thornton, “The Hobbit” star Martin Freeman and Colin Hanks, while “True Detective” starred Matthew McConaughey and Woody Harrelson — names that would likely be reluctant to sign on for a multi-year TV project.

“You’re not asking anyone to sign up beyond one commitment,” Grad noted. “It’s like doing a movie.”

For “Fargo” executive producer and writer Noah Hawley one big benefit has been an opening up of storytelling possibilities, unencumbered by the expectation of a certain number of episodes.

“As I sit down with people and talk about more traditional series, it’s amazing how often you’re stopped by, ‘Well, I can see what episode eight is, but I can’t see what episode 68 is.’ And the fact that that sometimes keeps people’s best stories from making it, that’s really too bad,” Hawley told TheWrap. With anthology series, Hawley noted, “The length of the story dictates the length of the show.”

On the creative end, the benefits of a series with a predetermined story appear to be manifold — and despite the from-the-ground-up challenge that an anthology series presents from season to season, the new model might be easier on the system.

“I would say traditional TV is harder,” Hawley offered. “Half the time, you’ve started breaking a serialized story and you don’t know how it ends, and you don’t know what you’re building to, and you’re making it up as you go along.”

And besides, just because a show is intended to run multiple seasons doesn’t mean it will — a fact that Hawley, whose credits include short-lived efforts such as “The Unusuals” and “My Generation” — is keenly aware of.

“I was sort of trained in a sort of Pavlovian way by my broadcast experience. I got really used to putting two years into creating a show and launching it and shooting it eight or 10 episodes and getting canceled,” Hawley said. “So I got used to starting over again. I got used to getting the most out of the story early and then starting over again. So this is sort of perfect for me.”

As for why audiences have been so receptive to anthology series, after decades of their own Pavlovian training to follow characters and situations from season to season, both Hawley and Starz’s Managing Director Carmi Zlotnik point to the binge-viewing phenomenon.

“I think definitely the rise of binge-watching has helped,” Hawley said. “People are really hungry for a complete story.”

Zlotnik further suggested that the anthology series, with its promise of a finite story, is a welcome relief for viewers who are forced by a constant bombardment of content to prioritize their viewing choices.

“[I]f they know that they’ve only got an eight or 10-hour investment, that seems like something that’s manageable, so people can feel like, ‘Well, that’s a good investment of my time to view that,'” Zlotnik offered.

While this new breed of anthology series might be a relatively new phenomenon in America, Zlotnik notes that “this kind of program has been a staple for a long time for the BBC and other European channels.” For Starz, which partnered with the BBC for “White Queen” and “The Missing,” that history equates to a rich source of material to draw from.

“I think that the limited series sells well, and it’s one that it’s easy to partner on. There’s a certain amount of it coming out of Europe and we keep an eye on that,” Zlotnik said. “So it’s easy for us to partner with some of those channels and pick up acquisitions and licenses that we can use to fill out our schedule.”

Whether it becomes a staple of American television remains to be seen.

“Obviously, these things can also turn out to be fads, and my hope certainly is that this form of storytelling survives,” Hawley said. “I think that there’s something that an audience really appreciates about knowing when they start a journey that they’re going to be able to end it.”

And if not, programmers can still take a cue from the anthology series model — by starting all over again and finding new territory to explore.