Tomer Capone — the Israeli actor who’s broken into pop cultural consciousness through his fan-favorite turn as the empathetic yet troubled vigilante Frenchie on “The Boys” — begins his interview with TheWrap recounting a favorite story of his, that of his chaotic audition process for the uproarious Prime Video hit.

He had been vacationing in China after completing an Israeli project when he received an email about auditioning for the role. However, since he was due to go back to his home country to attend one of his close friends’ weddings a couple of days later, he asked for an extension. When he got the sense that it was “urgent,” he learned his lines on the plane and opted to shoot his tape between noon — after his flight landed — and the evening — when the wedding would commence in Tel Aviv.

“And the scene was Frenchie is fighting with Butcher [played by Karl Urban] about Translucent,” he recounts, adding that he knew nothing about the characters or their comic book lore. “So I took my acting gun — rubber, fake gun — and I went to my friend’s house. She was kind enough to film me in her backyard in Tel Aviv. And we did this crazy scene … and did one take, two takes, three takes, and I’m really into it, when in the midst of, I think, the second or third take a group of undercover police with their badges [are] coming into her yard with real guns drawn at us like, ‘Throw the gun down.’”

Thankfully, one of the cops quickly identified Capone as an actor he recognized in the Israeli drama series “Fauda” on Netflix, and the incident turned out to be a misunderstanding by a neighbor who had been looking out the window and believed the gun and ensuing argument to be real. 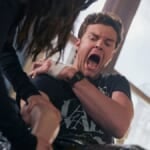 Also Read:
‘The Boys’ Renewed for Season 4 at Prime Video

“Luckily, I didn’t get my head blown off,” Capone says with an air of ease, far removed from feeling “shaken up about it” at the time. When we speak, he often gazes off-camera for an extended period of time, deep in thought and musing about just the right word to use to describe everything from his relationship to his scene partner Karen Fukuhara, who plays Kimiko, to what he wants Frenchie to explore next. In other moments, he cracks lighthearted jokes, suggesting that Frenchie begin a new friendship with the V-fueled, out-for-blood hamster, Jamie, introduced in last week’s episode, to make Kimiko jealous.

Run, he did. Upon landing, Capone shaved his floppy head of hair and immediately did a deep-dive into the character. “I was like bring me the boots,” he recounts, referencing Frenchie’s signature black combat footwear. “I need the boots. I don’t care about anything. I want the boots, shaved my hair and went to the most bizarre, funkiest … places I could find to just hang around weird people. Funny enough, I blended right in, and I was one of them. That really helped me in finding Frenchie.”

Frenchie is the bleeding heart of the Boys. Previously a criminal-for-hire, the vigilante is in the throes of trying to escape his former trauma-filled life when we first encounter him. He’s adept at making targeted weaponry to fight Supes, and Butcher is able to rope him back into the group in Season 1 when he forces him to peer into a trunk where Translucent is being held captive. Later on, he becomes instrumental to Kimiko — whom he helps rescue after she’d been indoctrinated and trapped in a dingy Vought-controlled warehouse — and her rehabilitation. Their intimate relationship serves as one of the few bright spots in an otherwise frenetic, cynical and brutal show.

“Oh, for me, it’s easy — I got plenty of traumas to work from,” he says about how he approaches playing Frenchie, a character that draws his comic relief from a well of sadness. He doesn’t expand further on the statement, but adds later that it’s somewhat similar to the act of reporting: “Now, you kind of do a background check, so you start with the fundamentals and then obviously, try to draw anything you can from the written word, because [at] the end of the day, the written word is the bread and butter.”

He switches to a more cheeky tone as he adds, “And then you call Eric Kripke a lot. You get him to a point where he’s like, ‘Tomer, you have it. Stop it. I can’t take any more questions.’ You’re just trying to figure out who this guy [Frenchie] is.” 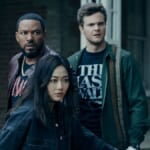 “The Boys” is based on the comic books by Garth Ennis and Darick Robertson, and Capone poured over as many issues as he could to learn about his character. The images now plaster the walls of his trailer, and he keeps a personal journal as Frenchie to understand his internal development. In Season 3, both Kimiko and Frenchie grapple with their status in the vigilante squad; as Butcher becomes increasingly unhinged and bloodthirsty in his quest for vengeance against Homelander (Antony Starr), even taking temp V to level the playing field, the duo wonder how much disrespect and exploitation they can take.

“It just brings up a lot of really interesting questions more than anything — questions that Frenchie never asked himself, which is ‘What is his part in the Boys, and who is he there for, and why is he there, and who is he doing it for?” Capone says, adding in jest that Butcher’s use of V is “like a betrayal … that he gave it to Hughie [Jack Quaid], not to Frenchie.”

This week’s episode — like all others in Season 3 — is a nonstop adrenaline fest, leading up to the much-anticipated debauchery that will take place in Episode 6, named “Herogasm” after the infamous comic book of the same name.

“The story is so intense this season, and it progresses so fast. And there’s only a few single episodes where they have, like, a second to breathe, but other than that it’s underwater throughout the entire thing,” Capone says. “It’s just like a roller coaster. It doesn’t stop.”

In the episode, Kimiko is beginning a long journey of healing in the hospital after Soldier Boy (Jensen Ackles) blasted her and inadvertently took away her powers. She kisses Frenchie, and imagines an entire musical number where she’s singing lead vocals, dancing along with him and the rest of the hospital staff. Though taking place entirely in her head, it’s a refreshing moment of respite and unfiltered joy.

“We were hustling, we were working hard for [the routine] and spending every minute we had toward shooting to try and perfect it and make it our own,” Capone says of working with choreographer Amy Wright to put the scene together, motioning with his hands to explain what a Suzy Q dance move (which he has now perfected) looks like. (In a separate interview, Fukuhara joked, “It was so much fun filming [it], and it was so different from what we’re used to — we’re always miserable and covered in blood.” Quaid added that he passed by a monitor depicting the scene and asked “What show is this?”)

Speaking more broadly about Fukuhara, with whom he shares a significant chunk of his scenes, Capone adds, “It’s one of those things where you connect with your partner and instantly get this feeling like, ‘Yeah, that’s gonna work. We’re on the same wave, riding the same motions — we understand our characters, and we complement each other.”

He and Fukuhara approach their scenes as a large collaboration, “not shutting up for a second” as they toss around ideas about how to approach a given moment between them, the “Slingshot” actor says.

“I remember sometimes we had those connection scenes — the soulmate scenes — and I remember the set becoming quiet, everybody’s quiet, and nobody’s moving anything. Everybody’s kind of … you feel like the set needs it for a second.” 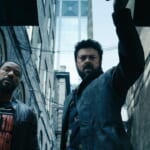 Also Read:
‘The Boys’ Season 2 Recap: All the Guts, Supes and Vought Atrocities You Need to Remember

However, Episode 5 doesn’t end on such a positive note for the couple: Frenchie is kidnapped by Russian crime lord Little Nina (Katia Winter), who is demanding payment for her loss of revenue after the Boys’ exploits in the country. Before that, he’s too stunned by the romantic moment to say much, and Kimiko herself seems surprised by her initiation of it. Asked what dynamic he believes Kimiko and Frenchie have, Capone is reluctant to commit to an answer.

“That’s a very interesting question that I’m not sure I’m still ready to find out. We need a couple more seasons for exploring that,” he says. And with Season 4 on the horizon, we’re sure there’s room for it.