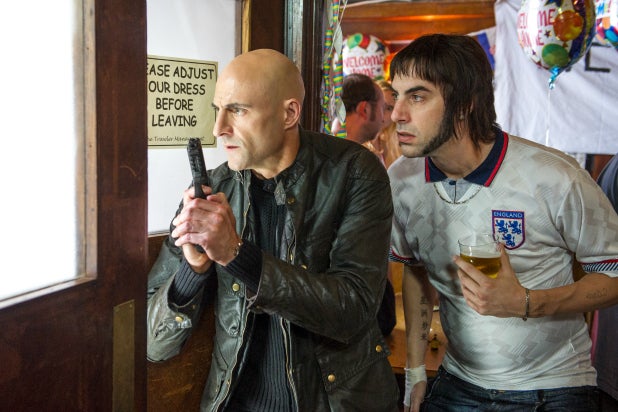 Sacha Baron Cohen returns to the screen in Sony’s “The Brothers Grimsby,” yet another raunchy comedy that walks the thin line between humor and vulgarity, critics say.

“Ultimately, the jokes are more stupefying than funny and no one’s anatomy is safe from a gratuitous close-up, whether it’s that of a wild animal or an Oscar nominee,” Associated Press writer Lindsey Bahr wrote. “It’s hard to give yourself over to a certain type of humor when you’re still recovering from the shock of what you just saw or heard.”

Others call it a “highly vulgar action comedy,” and one critic went so far as to say that “The Brothers Grimsby” is a film he “actively hates.” However, TheWrap’s film reviewer, Tim Crogshell wrote: “‘The Brothers Grimsby’ is funny. Get over it,” which shows that the film’s almost balanced Rotten Tomatoes score (currently 44 percent) is warranted.

See 11 of the worst reviews below.

Brian Truitt, USA Today:
“Directed by Louis Leterrier, the highly vulgar action comedy (½ out of four; rated R; in theaters Friday nationwide) isn’t nearly as funny as it thinks it is spoofing spy tropes and buddy films and making a mockery of AIDS, politicians, movie stars and working-class Brits. At the very least, it’s more entertaining than the time Baron Cohen dumped ashes on Ryan Seacrest at the Oscars but only barely.”

Alex Leadbeater, What Culture:
“Oh, there are movies that are completely boring from start to finish, movies that miss the mark to such an extent it’s impossible to not get unbridledly annoyed by them and movies that are so incompetently made that they barely even qualify as a movie. But there are only really a handful of films I would say that I actively hate. ‘Grimsby’ is one of them. For starters it’s completely and utterly pointless, the third spy comedy we’ve got in just over twelve months and the second to star Mark Strong. But I was willing to give it the benefit of the doubt because Sacha Baron Cohen made Borat a decade ago and for some reason we don’t seem to learn from out mistakes.”

Lindsey Bahr, Associated Press:
“Ultimately, the jokes are more stupefying than funny and no one’s anatomy is safe from a gratuitous close-up, whether it’s that of a wild animal or an Oscar nominee. It’s hard to give yourself over to a certain type of humor when you’re still recovering from the shock of what you just saw or heard. And boy, does ‘The Brothers Grimsby’ push those boundaries, over and over and over again.”

Charles Bramesco, Uproxx:
“But the paint-by-numbers plot still can’t diminish the shocks in the more stomach-churning set pieces, shocks for shock’s sake they may be. If your only desire as a moviegoer is to feel something, anything, then Cohen’s nearly-hostile intentness on being stickier, smellier, and crasser than anyone else in wide release might get your blood pumping. (Perhaps it’s a minor achievement, and more effective statement of social subversion than anything found within ‘Grimsby,’ that Cohen got bona fide studios to finance his John Waters-level flights of gross fancy.) And even in that case, the scant laughs aren’t worth the sore ass you’ll feel in the morning.”

Phil Villareal, OK! Magazine:
“‘The Brothers Grimsby’ stinks of desperation for comedic force of nature Sacha Baron Cohen, and the strained effort doesn’t pay off. Cohen, who unleashed his no-holds-barred satirical genius on an unsuspecting world in the form of Ali G, Borat and Bruno, is out to shock and disturb the audience while making them laugh in the action-comedy hybrid he masterminded as co-writer and star. But this one is all reach and no grab. The result is a confounding, rarely funny mess.”

Elise Nakhnikian, Slant Magazine:
“The film is an anti-snobbery stealth bomb, delivering the message that dumb jokes and other simple pleasures, and the unpretentious working-class people who enjoy them, are every bit as good as the sanctimonious elites who look down on such things. To get viewers to think about whether they line up on one side or the other of that divide or straddle it, more or less uncomfortably, ‘The Brothers Grimsby’ keeps firing jokes at us, daring us to laugh by lining up one after another, many of them stupid, overfamiliar, or potentially offensive, then taking the premise so far that you may find yourself laughing at the sheer absurdity of the thing. Or not.”

Manohla Dargis, New York Times:
“Mr. Cohen just seems off his game in ‘Grimsby,’ and it may be that the movie’s high concept proved too constricting for someone who has done some of his best work (as in the ‘Borat‘ film) with a looser, more episodic format. He seems boxed in, rather than liberated by, the spy movie, which of course is already self-parodying, as illustrated in the opener of ‘Grimsby,’ which crams an entire franchise of action-movie clichés under the credits.”

Also Read: Why 'Zootopia,' 'Brothers Grimsby' and Other Movies Change Titles When They Open Overseas

Kyle Smith, New York Post:
“As a comedy, ‘The Brothers Grimsby’ is weak and scattershot, but it’s useful as an unintended self-indictment of the chattering classes’ disgust and disdain for white working folk.”

Peter Travers, Rolling Stone:
“Cohen and Strong, so great onstage in ‘A View From the Bridge,’ have a lively chemistry when Leterrier doesn’t douse it with sentimental drool. You get that sinking feeling when you realize that gross is all there is to ‘Grimsby.’ The coset Cohen apart got lost somewhere. Maybe in that elephant’s vagina.”

Robert Abele, Los Angeles Times:
“Sacha Baron Cohen‘s humor is to show you a doughnut, eat it, then tell you where it’s been. Then maybe reveal how it wasn’t a doughnut. Whether you laugh, reel in disgust, or smile and say ‘Touché,’ he’s got his bases covered. While exuberant tastelessness has certainly made a place for itself at the comedy table, thanks in part to Cohen’s own oeuvre, his new ‘The Brothers Grimsby’ spends 80 energetic minutes trying to make his nude wrestling scene in “Borat” seem as quaint as slipping on a banana peel.”

Stephen Schaefer, Boston Herald:
“A sentimental sibling reunion saga encased in a cascade of gross-out jokes and occasionally bright one-liners, ‘The Brothers Grimsby’ is a treat only for die-hard Sacha Baron Cohen fans. The once subversive sense of humor Cohen established with his Ali G and Borat characters has curdled into predictable plotting, familiar jokes and nonstop vulgarity.”