“Did people make jokes about the plague after the plague?” asks co-writer and director Judd Apatow in a new behind-the-scenes look at his Netflix comedy “The Bubble.”

The film came about during the pandemic, and tells the story of a group of actors and filmmakers making a franchise blockbuster sequel in the middle of the COVID-19 pandemic.

In a situation not dissimilar from the one under which films like “Jurassic World: Dominion” were made, “The Bubble” chronicles the increasingly frayed nerves of the cast and crew as they’re forced to quarantine in a hotel for the duration of the shoot. 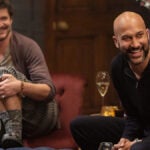 Karen Gillan leads the cast as an actress from the fictional “Cliff Beasts” franchise who reluctantly returns for the sixth installment of the series. She’s joined by the likes of Pedro Pascal, Keegan-Michael Key, Leslie Mann, David Duchovny, Vir Das and Iris Apatow playing her fellow castmates, while Fred Armisen plays an indie director in over his head on his first franchise film.

“Judd’s process is unlike anybody I’ve ever worked with, and I think it’s unlike anybody in the industry,” Key says in the behind-the-scenes video above. “There’s something very, super, super collaborative about the process because he puts together a script that, in a manner of speaking, is almost a suggestion.”

Apatow and the cast get candid about the rigors of shooting the film during the pandemic in the video, and the “Trainwreck” filmmaker says the COVID-19 protocols depicted in the film are purposefully a little off-center. “We’re trying to cover the logic that this is early in the pandemic and maybe they have all the protocols wrong,” Apatow explained.

Take a look behind the scenes of the film in the video below. “The Bubble” will be released exclusively on Netflix on April 1. 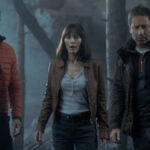