Filmmaker Judd Apatow has long been a proponent of the theatrical experience, but when it came time for him to make his first streaming film for Netflix, he embraced the at-home nature of the intended audience to produce the film differently than his previous features.

“The Bubble” tells the story of a cast and crew assembling to shoot a franchise blockbuster sequel in the early days of the COVID-19 pandemic (inspired by the difficult productions of “Jurassic World: Dominion” and others). Trapped in a hotel for isolation purposes, the cast and crew slowly go mad, and Apatow’s film tackles many of the same issues everyone else experienced during the pandemic – except on a heightened scale.

Like with his previous films including “Knocked Up” and “Trainwreck,” Apatow assembled a knockout cast of comedic talent that includes Karen Gillan, Keegan-Michael Key, David Duchovny, Fred Armisen and Leslie Mann. But unlike his previous features, Apatow produced and edited the film with the express knowledge that the intended audience might pause the movie to take a break. 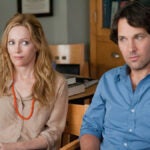 Also Read:
Judd Apatow Script for ‘This Is 40’ Sequel in Development (Exclusive)

“I wanted to make what I wished there was more of on streaming services,” Apatow told TheWrap in a recent interview about the film. “There aren’t a lot of comedies being made and I think we all have those nights where we’re searching for something. So my approach was, what do I wish was there? I know how ‘Schitt’s Creek’ got me through some rough moments during the pandemic and I wanted to create something like that. So we produced it almost like it was a two-hour ‘Simpsons’ episode.”

So Apatow embraced the Netflix streaming release. “It didn’t go through the normal process of grinding it to play to a theater crowd,” the co-writer and director said. “We showed it to friends and we did a preview but we really edited it assuming people might pause it and eat dinner and then finish later (laughs). And that was fun and sometimes you keep in the jokes that maybe wouldn’t get a laugh in a theater but might be someone’s favorite joke because it’s so weird.”

While Apatow is frequently criticized for the lengthy running times of his comedies, at 126 minutes “The Bubble” is Apatow’s third-shortest film yet – behind the Amy Schumer-fronted “Trainwreck” (125 minutes) and his first feature “The 40-Year-Old Virgin” (116 minutes). And yet there are jokes and scenarios that play out almost like mini-sketches inside the film, which speaks to Apatow’s comparison to an overlong episode of “The Simpsons.”

The filmmaker has already struck a new deal with his home studio of Universal Pictures to create more films and television for that studio, with future films made by Universal almost certainly getting a theatrical release, but “The Bubble” marks a curious and largely successful experiment in Apatow’s filmography.

Look for more from our interview with Apatow on TheWrap later this week. “The Bubble” premieres exclusively on Netflix on April 1.