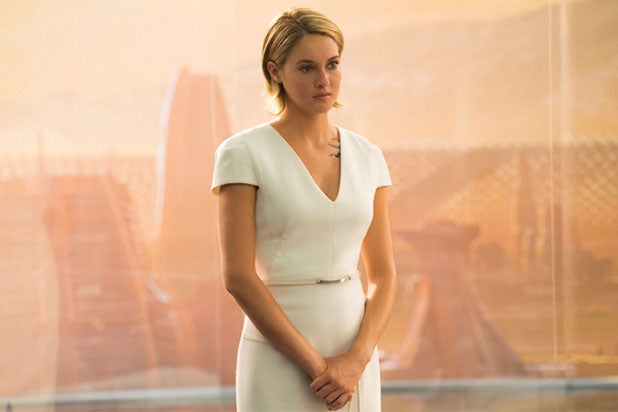 The “Divergent” series is back with “Allegiant,” with the same characters and — unfortunately — the same plot, critics say.

“‘The Divergent Series: Allegiant’ brings back the same cast of characters to do more or less exactly what they did in the previous films, only this time in sets with more sci-fi gloss than postapocalyptic grunge,” TheWrap’s film critic Ben Croll wrote.

Other critics have called the threequel a “quagmire, an unwinnable war,” “an appalling piece of work,” as well as “plodding, ludicrous and, at times, undecipherable.”

The film, starring Shailene Woodley, Theo James, Ansel Elgort, Miles Teller and Jeff Daniels among others, currently has a score of 10 percent on the review aggregator Rotten Tomatoes. That is significantly less than its predecessors, with the first film scoring 40 percent, and its sequel coming up with 29 percent.

The film, directed by Robert Schwentke, is also set to rake in less at the box office when it opens wide this weekend. The first two films grossed $54.6 million and $52.3 million, respectively, while “Allegiant” is projected to earn somewhere between $30 million and $40 million.

The bad reviews won’t help. Here are 11 of the worst.

Ariana Bacle, Entertainment Weekly:
“‘Allegiant’ aches to be a thought-provoking, moving allegory of the current world. Instead, it’s an unwieldy two hours too unintentionally silly to validate how seriously it takes itself.”

Amy Nicholson, MTV:
“‘The Hunger Games’ expanded its civil rights sci-fi hook into a cynical study of leadership and corruption. ‘Divergent’ feels like a hasty idea scribbled on construction paper, crumpled into a ball, and ditched in a mud puddle. Even it can’t tell what it wanted to say. Instead, it’s a soggy spit-wad toward the good teen movies that shames the whole genre. Burn it all down, Girl on Fire. Burn it all down.”

Peter Travers, Rolling Stone:
“‘The Divergent Series: Allegiant’ is another one of those cynical Hollywood cash grabs that takes the third book in bestselling juvie-lit trilogy (see ‘Twilight’ and ‘The Hunger Games’) and stretches that last book into two movies so audiences are tricked into paying twice for egregiously padded piffle. Diligent ‘Divergent’ readers probably know Veronica Roth‘s third book was hardly good enough for one movie. So the screenwriters actually invent stuff of their own. If only their stuff had a spark of life it might be forgivable, but ‘Allegiant’ plods along like a franchise on its last legs. Who remembers where we left off last time in ‘Insurgent?’ My point exactly — no one.”

Kenneth Turan, Los Angeles Times:
“As directed by Schwentke, who did the more involving ‘Insurgent’ but won’t be returning for the final film, ‘Allegiant’ has its share of brisk action and high-tech gizmos like drones that obey finger commands. But because the series’ plot reveal turns out to be more confusing than compelling, and because turning a novel into two films invariably leads to inflated productions, only the most devoted fans of the book will pledge allegiance to what’s on the screen.”

Scott Tobias, NPR:
“Creatively speaking, if not financially, the ‘Divergent’ series is less a franchise than a quagmire, an unwinnable war that nonetheless must be fought until the bitter end. And like all quagmires, the terrain has been hostile from the start: Based on Veronica Roth‘s bestselling novels, the films have tried to advance a ‘Chosen One’ narrative through the awkward rigging of a dystopian ‘faction’ system that, at best, only makes sense when vast swaths of the screenplay are carved out to explain it. Three-quarters of ‘Insurgent,’ the most recent entry, were devoted to opening a mystery box from ‘The Founders'; the last quarter asked the audience to sort through the tortured logic of its contents.”

Also Read: Why 'Allegiant' Might Signal the End of Days for Dystopian YA Movies

Bill Zwecker, Chicago Sun Times:
“I spent a lot of the time watching the third film in the ‘Divergent’ series thinking, ‘Huh?’ There were so many holes in the storyline, plus inconsistencies — both from author Veronica Roth‘s original underlying material, and from where we left off in the last film — that I was both confused and deeply disappointed by this very unsatisfying movie.”

Mara Reinstein, US Weekly:
“Plodding, ludicrous and, at times, undecipherable, this post-apocalyptic drama — the third film of the ‘Divergent’ series — is a disaster in every sense of the word. No chance it will entice newbies, while even the franchise’s most ardent fans will likely find it a half-baked slog. (That is, when they’re not bellyaching over its wild veering from novelist Veronica Roth‘s source material.)”

Jeannette Catsoulis, New York Times:
“A flaccid blend of eugenics, purloined children, memory-wiping gas and laughably unlikely scuffles, ‘Allegiant’ (directed by Robert Schwentke) offers a weak bridge to the series’ conclusion. Whether audiences will still be allegiant after crossing it remains to be seen.”

James Verniere, Boston Herald:
“Stick a fork in this ‘Divergent’ series. It’s done. In fact, this knock-off of ‘The Hunger Games’ was dead on arrival back in 2014 with the first film in the four-part franchise. This latest effort, ‘The Divergent Series: Allegiant — Part 1,’ another adaptation of Veronica Roth‘s derivative dystopian young adult novels, is not just a mouthful, it is yet another splitting of a final volume into two parts for greed’s sake. It is also an appalling piece of work by all involved. Do not expect me to explain the plot to you. I just saw it and have already started extracting it from my head.”

Isaac Feldberg, We Got This Covered:
“With ‘The Divergent Series: Allegiant,’ Hollywood’s most dishwater-dull YA franchise hits its messy, moronic nadir (or so we can hope – there’s one more movie on the way, and consequently one more opportunity for the series to sink to uncharted new depths). To be fair, it only just edges out ‘Insurgent’ (also a thoroughly dismal piece of work directed with consummate lethargy by Robert Schwentke), less because it’s a cinematically inferior work and more because it finally proves, beyond a doubt, that no one involved with this franchise has been able to regain any semblance of control over its creative direction, or even feels it’s necessary to do so (it is).”