There aren’t many moments of levity in Everardo Gout’s “The Forever Purge,” but you’ll probably have a hearty chuckle when — at the end of this dystopian thriller about America devouring itself over political, economic and racial divides — the credits claim that “Any similarity to actual persons, living or dead, is purely coincidental.”

The “Purge” franchise imagines a very near future in which rage is openly stoked by American politicians, the populace is heavily armed, and just enough people think that violence is the solution to their problems that it threatens the safety of the entire populace. The idea, as laid out by political party The New Founding Fathers, is to accept America’s violent nature and give citizens carte blanche to let off steam one night a year. 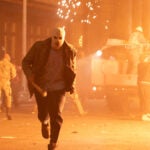 The reality of “Purge Night,” as revealed over the course of the franchise, is that it’s merely a flimsy excuse to justify white-supremacist violence. The wealthiest (read: white) Americans buy fancy security systems and sit out the mayhem. Everyone else is a sitting duck. And if the impoverished and people of color can’t be manipulated by this system into destroying each other, small armies of mercenaries escalate the mayhem to keep the population of have-nots to a minimum.

In “The Forever Purge,” the have-nots we’re following are undocumented immigrants in Texas, who are routinely targeted by racists during the annual murder holiday. Our protagonists Adela (Ana de la Reguera, “Army of the Dead”) and Juan (Tenoch Huerta, “Son of Monarchs”) only recently crossed the border and have found jobs working at a butcher shop and a ranch, respectively. Juan’s boss, Caleb Tucker (Will Patton), seems to be a decent man, but he also seems oblivious to the tensions brewing between Juan and Caleb’s son, Dylan (Josh Lucas).

Purge Night comes and, miraculously, it goes, with lots of suspense but no serious threat to the protagonists. But after the sirens go off, which would normally signal the end of the holiday, the violence continues. People have decided that this Purge will never, ever end. Violence has become completely normalized, and any illusion of a social contract has been irrevocably broken. Now the only way to escape a divided, violent, dystopian America is for Adela, Juan, and the Tucker family to cross the border into Mexico.

Let’s just be frank about this: “The Forever Purge” tackles its thematic material about as delicately as “The Day After Tomorrow” tackled climate change, complete with the same ironic plot point where anti-immigration Americans are forced to emigrate to Mexico because their irresponsible, short-sighted government wrecked the whole country. 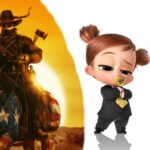 But “The Purge” franchise’s lack of subtlety has always worked in its favor, freeing these furiously relevant dystopian stories to confront issues head-on that, historically, are often underserved when they’re not addressed directly. How exactly would one make an understated film about all the heavily armed racists in America deciding to rise up at once to kill people they don’t like? And what good would it do to downplay just how terrible that would be?

Director Gout and screenwriter James DeMonaco know that “The Forever Purge” is operating on multiple levels of allegory, and they present the movie in turns like a revisionist Western and a modern Civil War epic, complete with exploding arrows fired at angry hordes of colonialists and one-take action sequences through fiery city streets. The cinematography by Luis David Sansans (“The Belko Experiment”) is angry and immediate, capturing the heavy-handed but effective symbolism of the franchise in memorable moments. As an action thriller with a political undercurrent, it’s as striking as any of the other solid “Purge” entries.

As a political parable, “The Forever Purge” hits rockier territory. DeMonaco has written all five feature films in the franchise, and directed the first three, and he treats this film like a proper conclusion to an epic saga, cataloguing the downfall of a democratic society. Taken as a whole, it’s a fitting, apocalyptic conclusion to a country that lost its way and forgot its promises.

But in the details, “The Forever Purge” can be frustrating. “The Purge: Election Year,” in which a more humane government is democratically elected after years of the holiday, ends in a cliffhanger suggesting violent insurrection soon followed. “Forever” skips ahead four years, ignoring that whole time period and going back to square one, where the New Founding Fathers are re-elected and Purge Night is back. It makes sense, but it undermines the best film in the series by dulling its conclusion. 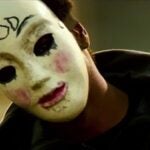 Also Read:
A Louisiana Parish Used ‘The Purge’ Sirens to Announce the Start of a Coronavirus Curfew (Video)

It also raises an eyebrow that the first time “The Purge” directly tackles the subject of immigration, DeMonaco writes a script that foregrounds a rich, white family as badass heroes: They believe in the American dream, they give angry speeches to the disenfranchised about how they’re pawns in a system that abuses them, and they get to claim that they’re not racist because they simply believe in isolationism without providing a counterpoint. It’s an atypically  apologetic portrayal of characters on the other side of the class divide for a film series that notoriously literalizes class warfare.

(And yet perhaps nothing is more implausible in “The Forever Purge” than the scene where, in the midst of a firefight for America’s soul, two of the characters enter a movie theater where Tod Browning’s “Dracula” is playing. In 35mm. Which suggests that, with the whole world going into the crapper, some random theater employee decided to fire up the projector and keep up with the reel changes because — the show must go on?)

“The Forever Purge” mostly gets away with its clunkiness because it’s addressing an increasingly common anxiety about whether, after so many years of unrest, this country really is on the brink of another Civil War. It’s exciting to see the American Dream fought for by people who truly appreciate it, and although de la Reguera and Huerta spend most of the film fighting off armed racists, the moments where they can simply inhabit their characters add much-needed humanity to an otherwise inhumane cinematic universe.

The words “Forever Purge” are uttered only a few times in Gout’s sequel. More often than not, the violent insurrectionists chant “The Purge Ever After!”, which fits. A world without consequence for hatred and violence would, to the worst people, be a fairy-tale ending. To the rest of us, it’s a living nightmare, and these films provide an exhilarating outlet to explore that fear, to imagine a way to overcome those oppressors. “The Forever Purge” sometimes loses its focus, but at its best, it’s still a riveting, violent, disturbing projection of how far America could backslide into the nation’s worst impulses.