Last September, TheWrap’s list of breakout talent at the Toronto International Film Festival included the female cast of Nick Simon’s slasher movie “The Girl in the Photographs,” the final film to boast the involvement of horror icon Wes Craven. Little did we know, however, that it would be the the guy behind the photographs, a young actor named Luke Baines, who would leave the strongest impression as the film’s primary villain — and no, that isn’t a spoiler.

“It’s not a secret and it was never meant to be,” Baines hold TheWrap as “The Girl in the Photographs” hits theaters on Friday from Vertical Entertainment. “Is it a whodunit? No, absolutely not. We know who’s doing it, but she doesn’t,” he said of the film’s protagonist, played by Claudia Lee.

Blessed with the striking looks of a male model, Baines creeped the hell out of festival audiences with his turn as a twisted killer. Born in Manchester, England but raised in Australia, Baines joked that he has “an Australian accent but English values.”

Also Read: Kal Penn on Playing 'Creepy' Fashion Photographer in 'The Girl in the Photographs' (Video)

He took to acting at a young age, eventually landing a role on the Aussie soap “Home and Away,” which has helped launch the careers of Hollywood stars including Chris Hemsworth and Isla Fisher. Baines had a small role in Disney’s “Saving Mr. Banks” before landing the plum part in “The Girl in the Photographs.”

Notably, Baines was also cast as David Bowie in David Fincher‘s HBO series “Videosynchrazy,” though the network stopped production last June after several episodes to reconsider the show’s creative direction. It likely would’ve been a breakout role for Baines, who was unable to discuss his experience working with Fincher due to a non-disclosure agreement. He was certainly a good physical fit for the part.

While that project was off limits for this interview, Baines was more than happy to talk to TheWrap about “The Girl in the Photographs,” working with Wes Craven and the current state of the horror genre. Follow him on Twitter at @LukeBaines.

How did you get your start in this business?
I remember being 6 years old and watching “E.T.” and telling my mom “I can do that. I want to do that.” So I started taking acting lessons and doing plays in school. When I was 15, I took it seriously and went to a performing arts conservatory in Sydney. It was probably the best time of my life — getting to act and sing and dance.

I didn’t want to be an unemployed actor, so I moved to London and got an office job because I decided that’s what you do when you become an adult. I met a casting director at a party, and she got me my U.K. agent. Before I knew it, I was auditioning mostly for American film productions.

There were a couple films I came close on, but the feedback I kept getting was, “You need to be in America.” I thought, I might as well do this and see what can come of it, so I got my visa.

Why do you think “Home and Away” has proven to be such a popular launching pad for young stars?
It’s the training environment. It’s a show that’s on five days a week, so it’s a heavy workload and you really push the limits of yourself as a performer. You just come out of it really sharp and ready to work, and that’s why I think so many Australians have had so much success.

When you’re playing a character like the one in “The Girl in the Photographs,” is it difficult to get into such a dark state of mind?
It was a dream of mine to play this kind of role. When it first came about, I jumped head-first into it and then I started doing research. I spoke to a criminologist who gave me such insight into who this person would be, and I read first-hand accounts that helped me learn what a person like this would be doing and understand their thinking and what their background would be.

The further down the rabbit hole I went, the more I realized how intense it would be. There are some pretty intense scenes with other actors where I’m playing the aggressor and I wasn’t prepared for how much it would shake me — watching people screaming for their life and being unable to help them because I’m the one doing it. There were a few takes where I was audibly gasping and [director Nick Simon] had to pull me aside and say, “Remember, you’re a serial killer.”

Without revealing too much, you’re paired with another actor in most of your scenes, though your interactions are largely wordless. How would you describe the nature of the relationship between your character, Tom, and his accomplice, Jerry?
That was my first question when I went in to audition. They’re meant to be a pair and they have a really unique chemistry going on between them. Nick wanted that to be evident, but it’s purposefully left a little ambiguous. From discussions I’ve had with the writers, there were earlier drafts where it was more clear what that dynamic was — Jerry does the things that I don’t have the stomach for, but also the things I don’t want to involve myself in. Tom enjoys being the mastermind and pulling the strings on the puppet. It’s another element he can control. 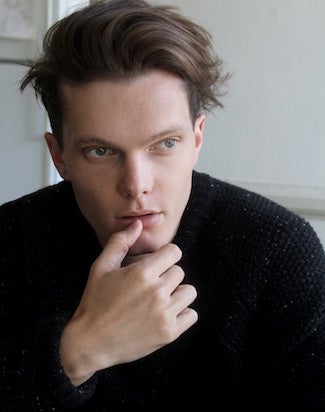 When I was 11 years old, I saw “Scream” and loved it. I got my dad’s Handicam and started filming scenes from it, so it had always been a dream of mine to work with him. When this audition came up and I saw his name in the email, I was like, “This can’t be real!” I still didn’t believe it until I met him the first day at the table read.

You worry about meeting your idols, and he just lived up to much more than I ever could’ve imagined. He was such a sweet, gentle man and one of those people who looked you in the eye and would really give you his full attention. That’s when it became real for me.

As the King of Slashers, did Wes Craven give you any advice?
He didn’t really give any advice, but one thing he did say was, “It’s scarier if we don’t know everything.” He was really big on that. He was big on holding back moments and giving the audience something to work for and not handing them everything on a plate. It’s a slow burn, but the writing plays with the comedy until someone dies.

How would you sum up your experience on set?
We shot in Canada, and it was like summer camp. I’d find Miranda [Rae Mayo] or Kenny [Wormald] sitting outside my door saying, “We’re going hiking!” I was incredibly disappointed one night when I stayed back on set for an extra two hours and snuck into the back seat of Claudia Lee’s car and waited patiently to scare her. It was futile though. I jumped up and she was like, “Luke, it’s 3 a.m.”

What’s your take on the current state of the horror genre? What works and what doesn’t?
I prefer thrillers, or a horror-thriller. I want that adrenaline rush like I’m going on a ride. Horror films are one of the only genres that have bucked the trend in terms of making money. There’s a lot more out there than in the past, but it’s become about how many scares you can deliver in 90 minutes. Even in the marketing, now they show you clips of audiences screaming just to prove it’s a scary movie. What’s frightening to me isn’t necessarily a jump scare, it’s more about creating tension and intensity, and there’s not a lot of films doing that at the moment.

What’s next for you?
Right now I’m doing my first pilot season. I’ve never gone through this process before and there’s a ton of material — lots of good stuff out there. I’m also writing a feature film that’s in the process of getting made. I’m learning that it’s isn’t always about talent, especially sitting on the other side with producers and directors and talking about cast.