There’s something of an art prank going on with “The Hateful Eight,” which is, as the opening credits portentously point out, “the eighth feature by Quentin Tarantino.” The writer-director has, in recent years, become a vocal champion of film projection over digital, and much has been made about his choice not only to shoot the film in the rarely-used Ultra Panavision 70 format, but also to release “Hateful” in the “roadshow” format of yore, complete with overture and intermission.

Celebrating the cinema of the past has always been Tarantino’s forte, although he’s usually been more inclined to rejoice in the seamier side of the moviegoing experience, (down to the scratches and cuts he inserted into the anthology film “Grindhouse”) rather than the sort of grandiosity used to ballyhoo the elephantine musicals and epics of the 1960s.

The prank part has to do with the movie that’s being offered up in such extravagant trappings — when you think of Tarantino shooting a Western in 70mm, you picture sweeping shots of cowboys and cattle stampeding across big sky country, rather than the rather intimate chamber piece he’s made here. The gap between material and presentation resembles a 3-D IMAX reissue of “My Dinner with Andre.”

There’s plenty of bloodshed and mayhem on display, to be sure, and Tarantino still revels in pushing buttons when it comes to depicting and discussing race in this country, but “The Hateful Eight” owes less to Sergio Leone than it does to Agatha Christie. If you’re the kind of moviegoer who got restless during the more dialogue-heavy sequences of “Death Proof” or “Reservoir Dogs,” you may find that there’s too much talk and not enough action in a movie that teeters on the three-hour mark.

If, on the other hand, you enjoy a Tarantino-scripted conversation or two or five — particularly in a period piece where the characters can’t make references to movies or TV shows — “The Hateful Eight” may well engage you as a darkly funny locked-door mystery that’s in no hurry to show its hand. 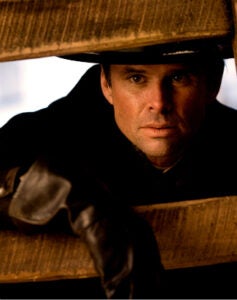 We begin in the great outdoors, when a stagecoach containing bounty hunter John Ruth (Kurt Russell) and his quarry, wanted criminal Daisy Domergue (Jennifer Jason Leigh), stops to engage with Major Marquis Warren (Samuel L. Jackson), a peer of Ruth’s who’s got two corpses of his own that he’s taking to town for a reward. After some haggling, Ruth offers Warren and his baggage transport to the town of Red Rock.

Soon thereafter, the travelers come upon Chris Mannix (Walton Goggins), who’s heading toward the same destination to become the town’s new sheriff — or so he says. In the meantime, a huge storm is brewing, so the party must stay the night at an infamous roadhouse known as Minnie’s Haberdashery.

When they arrive, Minnie is nowhere to be found, but she appears to have left Bob (Demian Bichir) in charge, and he’s already taking care of a fairly full house, including hangman Oswaldo Mobray (Tim Roth), cowpoke Joe Gage (Michael Madsen) and retired Confederate general Sandy Smithers (Bruce Dern).

The Civil War is still a recent, and touchy, subject for the group, what with Warren having fought on the Union side — and, it’s rumored, having killed many white soldiers on both sides — while Mannix was part of a CSA splinter army. But political differences are pushed aside when it becomes clear that not everyone is who they appear to be, and that there may be a conspiracy afoot to liberate Daisy from the clutches of the law.

The results are more “Clue” than “The Magnificent Seven,” but no less entertaining. Tarantino does play some dirty pool with the narrative, withholding particular bits of information from the audience until late in , but never more so than what Christie used to do in her prime. The pitch-black wit of “Jackie Brown” is on display here as well, making for engaging and unpredictable exchanges between the characters, even as the tension swells around them.

Once again, the filmmaker has assembled a top-notch cast and given them characters and dialogue that allow them to really sink in their incisors. It’s a fascinating ensemble, but if there’s an MVP, it’s Goggins, whose character turns out to be much more and much less than one might imagine on first viewing, straddling a fine line between clever and idiotic, villainous and sympathetic.

Tarantino’s frequent use of the N-word will no doubt inspire both challenges and defenses — I’d argue that, as it was in “Django Unchained,” the term allows modern audiences to experience period racism that much more vividly — and there’s also the matter of Jennifer Jason Leigh, who spends much of the movie getting punched in the face by various characters. It’s shocking at first, as it’s intended to be, but Daisy winds up being just as dangerous and threatening (and just as hateful) as the men around her, and her treatment winds up feeling strangely equal-opportunity when all is said and done. Not everyone will see it that way, of course, and if the film sparks debate about the treatment of women in violent action movies, then so much the better.

If there’s one element of “The Hateful Eight” that merits the lavishness of the production, it’s Ennio Morricone’s score — the extravagant Western has always been one of this legendary composer’s many wheelhouses, and he’s given free rein to craft another grandly exuberant and haunting soundtrack.

Now that he’s given us a talky, indoor Western, one wonders what other strange genre mashups Tarantino has in store — perhaps a black-and-white musical staged as a radio play? In any event, “The Hateful Eight” may frustrate some of his more literally sanguine supporters, but it’s nonetheless an entertaining piece of dialogue-driven theater — with the occasional rifle-shot to the head.