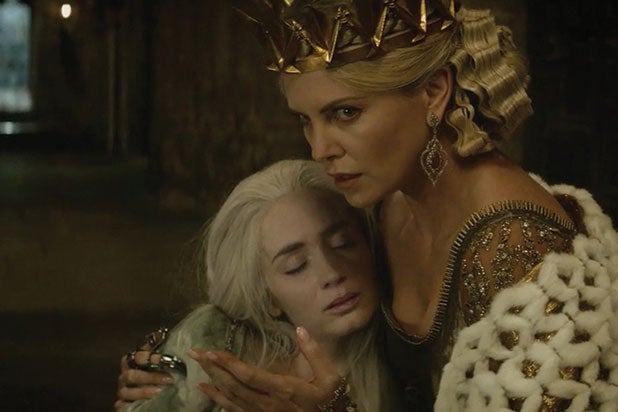 “The Huntsman: Winter’s War” is hitting theaters this Friday, but critics agree that the Huntsman didn’t need another movie to tell his story.

The sequel to 2012’s “Snow White and the Huntsman” is being described as a “drab and visually grim affair,” “plodding and predictable” and “a mess.” Currently, the film holds a score of 15 percent on Rotten Tomatoes — compared to the original’s 48 percent score.

“‘The Huntsman: Winter’s War’ is all fairly silly, but unfortunately the filmmakers don’t quite realize it — along with banning love, decent gags seem to have been outlawed, too,” wrote TheWrap film critic Jason Solomons.

Chris Hemsworth and Charlize Theron reprise their roles in the prequel, with Emily Blunt and Jessica Chastain joining the cast. Kristen Stewart, who played the titular role of Snow White in the first film, didn’t return.

The film, focusing on a war between sisters Ravenna and Freya (Theron and Blunt), is looking to make around mid-$20 million when it opens in 3,788 theaters this weekend.

Scott Mendelson, Forbes:
“It’s a mostly drab and visually grim affair, surviving purely via the charisma of its four principal actors. The majority of ‘The Huntsman’ is an act of narrative justification, spending more time explaining where the pieces are on the chess board than actually playing chess. Nearly the entire first act is a would-be expositional prologue that could have been wrapped up in a pre-credits sequence (most of the storytelling in this first 25-minutes is done via voice over) and the remaining 85 minutes never recovers that lost momentum.”

Geoffrey Macnab, The Independent:
“Mirror, mirror on the wall, what’s the silliest film of them all? ‘The Huntsman’ sequel must come close. It’s a half-baked mish-mash of a movie with ingredients taken from Disney’s ‘Frozen,’ Tolkien, ‘Game Of Throne’ and the brothers Grimm, and with a bit of Wagnerian bombast added for good measure. The performances here are spirited enough in a rollicking Hackney Empire Christmas pantomime, now I see you, now I don’t, sort of a way. It is the premise and the plotting that really drag ‘The Huntsman’ down.”

Peter Bradshaw, The Guardian:
“Here it is: the least keenly anticipated prequel-slash-sequel of the year. It is the follow-up that nobody much wanted to the film that nobody much liked, resulting in something even more visually elaborate and boring, and about which the number of tosses that can be reasonably given is lower than ever. What on earth is the point of this dreary sub-franchise fairytale product? It takes its audience to a Zen state beyond pointlessness, an incoherent CGI world created by an army of execs at a million dire meetings, grimly hashing out the ways in which the profitability of the first film could be continued and maximised by pinching plot points from Frozen, and set-dressing from Narnia and Middle Earth.”

Cath Clarke, Time Out:
“Mirror mirror on the wall, what’s the fairest sequel of them all? Not this follow-up to ‘Snow White and the Huntsman’, which starred Kristen Stewart as Snow White and Charlize Theron as her hot evil stepmother. ‘Winter’s War’ is hammily entertaining, but at points feels like a Russian oligarch has thrown a ‘Game of Thrones’ party and bunged his favourite Hollywood actors a few million quid each to come in fancy dress.”

Kate Erbland, IndieWire:
“The film’s narrative is both plodding and predictable, and after the third or fourth battle sequence that leans so heavily on loud, thudding noises and swirling leather topcoats that it’s impossible to see who is actually hitting who (and, moreover, why), audiences may be in danger of remembering just which ‘reimagined’ fairy tale they’re watching on screen. The trick is, of course, they’re not watching a reimagined fairy tale — they’re watching a reworking of a reimagining of a watered-down story that’s been forced into a franchise mold utterly unequipped to deliver an entertaining or coherent story. It’s worse than taking a bite of a poisoned apple, a la Snow White, because at least the apple had a reason for existing in the first place.”

Matt Singer, Screen Crush:
“Watching ‘Winter’s War’ would be preferable to sitting quietly in the dark for two hours. It’s just not preferable to watching any of the movies it so freely steals from. There’s really nothing wrong with it beyond the fact that it has absolutely no reason to exist except to make money. All Hollywood movies are designed to make money, of course, but usually they do other things too. They inspire, or educate, or express an artist’s vision. They say something about the world in which they were made. The only thing this patchy pastiche says is that movie studios are so desperate for franchises these days that they’ll make a sequel to a Snow White movie without Snow White.”

Philippa Hawker, Sydney Morning Herald:
“‘The Huntsman: Winter’s War’ sounds more like a superhero movie than a fairytale. It’s a sign, perhaps, of the identity crisis that plagues this movie, a clumsily assembled patchwork of images, ideas, storylines and fabulous frocks that never comes together with any kind of consistency or flair. It’s a mess, and a dour one at that.”