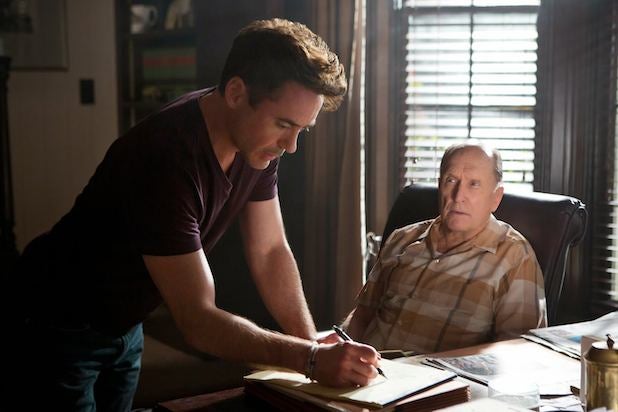 Critics have ruled that “The Judge” is guilty of embracing clichés, but doesn’t deserve any jail time since stars Robert Downey Jr. and Robert Duvall deliver commendable performances.

The Warner Bros. release hitting theaters this weekend has garnered a 49 percent approval rating from critics counted on Rotten Tomatoes. With 49 reviews being labeled “rotten” out of the 95 aggregated, critics are almost split right down the middle as to whether or not director David Dobkin‘s nearly two-and-a-half-hour legal drama is worth a trip to the theaters.

According to TheWrap‘s Inkoo Kang, that decision depends on how much potential ticket buyers love Downey’s trademark wit and snappy delivery.

“‘The Judge’ is tailor-made for Downey’s gift for delivering a quippy, arrogant put-down like he’s doing his target a favor. Hank’s anti-heroism is a refreshing splash of lemon juice with an occasional spritz of sour vinegar,” Kang wrote in her review. “But much of director David Dobkin’s cynically cloying legal and family drama goes down like a lump of aspartame.”

See video: Robert Downey Jr. Hints That Someone Else May Wear the Armor for Fourth ‘Iron Man’ Movie

Downey stars as a hot-shot lawyer in Chicago who returns to his hometown in Indiana to defend his estranged father — a judge, played by Duvall — who is charged for the death of an ex-convict he has had a particularly rough relationship with. Vera Farmiga plays one of Downey’s former flames, while Billy Bob Thornton joins the party as a prosecutor and Vincent D’Onofrio plays another son of the eponymous lawman.

Los Angeles Times Kenneth Turan had the same issues with the story, but emphasized that the performances by the major players on screen are worth the price of admission.

“Robert Duvall and Robert Downey Jr. are not only the boldface names attached to ‘The Judge,’ but their powerful symbiotic acting is the key reason to see this film,” Turan wrote. “However, as directed by David Dobkin from a script by Nick Schenk and Bill Dubuque, this vivid and volatile core is often undercut by a weakness for middle-of-the-road sentiment and a desire to be all things to all people.”

Arizona Republic critic Bill Goodykoontz went as far as to say that the film would “likely get laughed out of theaters” if it were not for Downey and Duvall’s powerhouse performances.

The film is saddled with a cliche-riddled script, written by Nick Schenk and Bill Dubuque, from a story by Dobkin and Schenk. Any references you can think of in an estranged father-son drama are present here, and they aren’t presented with any particular spark of imagination,” Goodykoontz wrote. “Luckily for Dobkin, Downey and Duvall are able to provide some.”

Also read: ‘Annabelle’ Reviews: Is This Creepy Doll Worth Skipping ‘Gone Girl’ For?

Detroit News critic Tom Long wasn’t as charmed by Downey’s performance, most likely because he was too distracted by story elements and characters he argues did not need to be there.

“‘The Judge’ is an over-stuffed film, the sort of movie that crams too much into too slight a story,” Long wrote. “There’s the legal thriller component, but the thrills keep getting watered down with further distractions. Let’s just say any film that has a high school romance rekindled, hints of incest, cancer, professional baseball, mental disability and repeated vomiting has too much going on, especially when some things have no tie to the basic story.”

USA Today critic Claudia Puig could not deny the chemistry between the stars, but she too couldn’t excuse the rest of the unsatisfactory elements in what she described as a “second-rate courtroom drama.”

“Mired in red herrings and time-wasting sidebars, ‘The Judge’ is a classic example of a second-rate courtroom drama,” Puig wrote. “It’s well-acted, with some occasional moments of clever dialogue, but the story is plodding, predictable and tension-free. If the essential premise doesn’t work, it doesn’t matter what terrific actors are cast.”