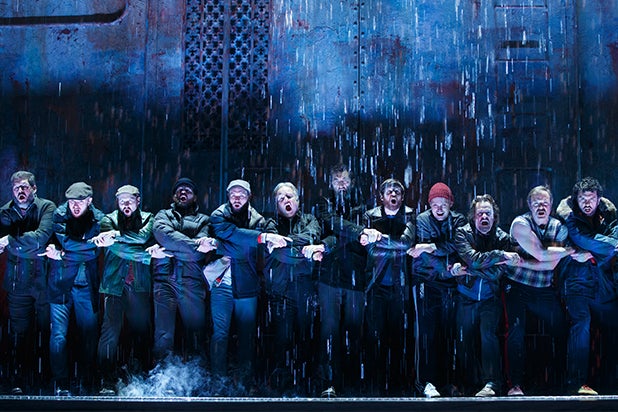 Everybody on stage in “The Last Ship” is pissed off at somebody. The young hero Gideon is angry with his father for keeping him stuck in Newgate, England, and his father is angry at Gideon for refusing to carry on the family tradition of being a ship builder, and girlfriend Meg is angry that Gideon’s leaving her to travel the world. Meanwhile, during the next 15 years (it’s a fast-moving musical), the townspeople are angry because the ship builder, Mr. Newlands, has closed shop, putting them out of work; and they flat-out reject his new job of reclaiming and repurposing industrial assets. Or as they put it, “junk and salvage.”

There’s more anger to come at the Neil Simon Theatre, where “The Last Ship” opened Sunday. Gideon never knew that Meg bore him a son, and the kid is now pissed off that his dad has been absent for the last 15 years.

In this brew of wrath and discontent, I identified most with Mr. Newlands (Eric Anderson in a cameo). He speaks the truth – shipbuilding in Newcastle isn’t ready for a comeback — and he offers people jobs recycling. Mr. Newlands is practical.

Also read: ‘On the Town’ Theater Review: Sailors on Leave, Broads on the Make

But musicals aren’t about being practical. They’re about dreams. Enter Father O’Brien (a cuddly, foul-mouth Fred Applegate), who is the only character who’s not angry even though he’s dying of cancer before the year’s out. He gives the townspeople hope: He will divert money earmarked for a church and put the cash into building one last ship. There’s no pay, but they’ll have the dignity of work. Amen.

If Father O’Brien had said, “Let’s build one last very small yacht,” he would have had me. But a ship?! Aren’t ships big and really expensive to build? Also, ships need crews, they carry cargo, they have scheduled destinations. None of these issues is addressed in John Logan and Brian Yorkey‘s dream-laden book, which leads me to believe they know less about building a canoe than even a small yacht.

But, if Judy and Mickey can put on a musical in a barn, these “Last Ship” people can build a ship and jump aboard on a cruise to nowhere. Then again, maybe Father O’Brien’s church was funded well enough to resemble Chartres. In that case, the whole show works.

Except it doesn’t. Even if these ship builders without wages had unlimited budget (a novel concept), there’s a problem with building a musical around a ship – at least this ship. We never see it being built.

“Kinky Boots” boasts a similar story of unemployed can-do workers with a dream, but that second-rate but effective musical has the advantage of our seeing what’s being made. We see the boots designed, rejected, redesigned, assembled, and then featured in a big fashion show.

In “The Last Ship,” director Joe Mantello gives us one scene in which workmen stomp around (intense choreography by Steven Hoggett) and brandish blowtorches (big sparklers, actually) that literally scorch the air around them. But nothing really happens. Eventually, something like a ship is vaguely indicated when the stage rises, everybody jumps aboard singing, there’s light from heaven, and a tsunami of sound envelopes us. It’s all as visually stunning and earsplitting as Mantello’s staging of “Defying Gravity” in “Wicked.” What Picasso is to paint, Mantello is to elevators.

His creative team knows how to dazzle, and for the record, they are Christopher Akerlind, lighting; David Zinn, costumes and sets; and Brian Ronan, sound. But while I was trying to recover my hearing, I had to wonder: Where’s the crew? Is there cargo or paying passengers? Do these shipbuilders know how to sail a ship?

Musicals are such simple things. To be successful, they need to fulfill a few basics. Like showing us how the characters’ dream is realized beyond a few cries of “The ship’s almost finished!”  Or showing what it’s like to fall in love. “The Last Ship” handles the latter essential very well, and it’s a multi-faceted love triangle that almost keeps this show from being completely scuttled.

While Gideon (an intense Michael Esper) has been away, Meg (a very intense Rachel Tucker) has been dating another man, Arthur (a relievedly subdued Aaron Lazar), who sings a touching love song, “What You Say, Meg?” It is followed with an equally poignant trio with their singing “When We Dance.” There are chords and harmonies here reminiscent of “If I Loved You” from “Carousel.” There’s also a rousing wake number “Show Some Respect” that gives a nod to early Kander and Ebb. And when Gideon sings to his son (Collin Kelly-Sordelet, again, very intense) a song of reconciliation, “The Night the Pugilist Learned How to Dance,” there are echoes of Jerry Herman, although Herman would have come up with a catchier song title.

That’s the big surprise of Sting‘s score. At its best, it’s pre-Sondheim. But it’s good pre-Sondheim, maybe great despite a few “Stomp”-with-overtones-of “Riverdance” numbers for that heavy-stepping, hard-drinking chorus of workers and townspeople.

“The Last Ship” is a classic example of a good score being set adrift by an ill-conceived book.